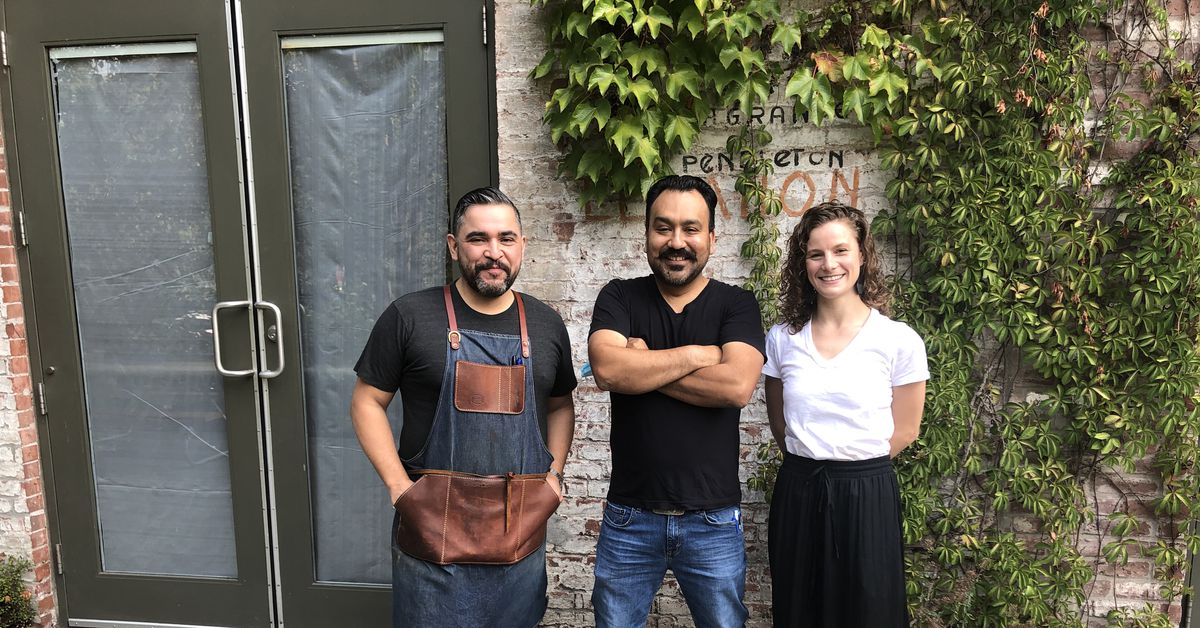 Lauro Romero, the chef behind South Waterfront seafood restaurant King Tide Fish & Shell, didn’t know he wanted to be a chef. But at 14, he landed a dishwashing job, and fell in love with cooking over time, eventually landing in the kitchen at King Tide and putting out dishes like lobster tortellini and halibut with potato gnocchi and snap peas.

But now he’s returning to the food he grew up with.

As a kid, Romero would spend the weekends at relative’s houses, where each family member would make their own intricate specialties, like mole or barbacoa. He remembers eating pastes, a Mexican-style pasty filled with tinga or ground beef in his home state of Hidalgo. He’s passionate about each of these elements of his culinary voice — the lobster tortellini and the guisados — but when restaurants temporarily shut down in the spring, he started to explore those food memories further, pouring energy into his pop-up, Clandestino PDX. Soon, the chef had a standing spot at buzzy cafe La Perlita, based in the center of the Pearl District’s Ecotrust building; within the next two months, he’ll have a full-blown restaurant, a collaboration between him and other members of La Perlita’s pop-up hub.

La Perlita is the brainchild of Angel Medina, the man behind Reforma Roasters; open for a little over two years, the cafe is now a Portland favorite, especially for its “True Mexican” mochas sprinkled with freeze-dried raspberries, cacao, and cocoa nibs. The space has also become a popular spot for pop-ups, with cooks and pastry chefs serving everything from mochi doughnuts to pavlovas to mini-tamales stuffed with jackfruit. Still, the cafe is nothing more than a coffee counter in a lobby with extra space for a folding table; Medina used what he had and developed a following, which he decided to share with other makers.

Now, Medina is opening a full-blown cafe with Romero and Olivia Bartruff, the pastry mind behind Olivia B Sweets. República will open later this fall, a multifaceted cafe serving Mexican wines, pastries, and guisados served with house-nixtamalized masa.

República, taking over a former Laughing Planet, is just steps away from La Perlita in the Ecotrust building, a space with high ceilings, exposed brick walls, and a central bar, which will shift roles throughout the day. In the mornings, Romero will tackle various Mexican dishes from throughout the country, specifically focusing on guisados and masa; Medina’s Reforma coffee will also make an appearance.

In the evenings, however, the cafe will shift into something more like a wine-and-dessert bar, with bottles from Mexican, latinx, and women-owned wineries, picked out by local winemaker Cristina Gonzales. “We’re trying to level the playing field, serve some things you might not see elsewhere,” Medina says. “We’re not importers, but we want to drop these names to the importers, try to create demand.”

Meanwhile, Romero and Bartruff will collaborate on an assortment of desserts and snacks for the evenings, a “house menu” often accompanied by pop-ups. Bartruff, like Romero, got into the food industry at 14, landing a spot at the Portland bakery Fleur De Lis. She had been baking and selling her own pastries for years, hopping in and out of formal bakeries, before landing a regular spot at La Perlita. The two pop-up chefs have been working on menus of pastes and other desserts, sharing ideas and planning out how they want the cafe to feel in the evenings. “I feel so lucky working with Lauro,” she says. “He’s the best chef you’ll ever meet.”

The weekend “brunch” at República will be dedicated to meals inspired by Romero’s family meals in Mexico, rotating often based on the chef’s whim. In particular, he wants to focus on the space’s nixtamal program, building dishes around masa. “There’s so much you can do with masa; we really want to explore that,” he says.

While many of the space’s standing concepts are centered around Mexican food and culture, Medina is adamant that República stay amorphous, seeing what works and welcoming in other pop-ups and artists. The front of the cafe is lined with wooden cubbies, showing off aprons and masks made by indigenous women in Mexico and cookbooks by latinx authors. He hopes to display local art, as well, hoping artists “find him.” And he wants to make sure that the pop-ups that land at República represent a wide swath of cultures and backgrounds, be it Korean or Latin American or something completely different. “It’s just a space,” he says. “We’re not bound by saying we have to do something specific.”

República is expected to open within the next few weeks at 721 NW 9th Avenue.