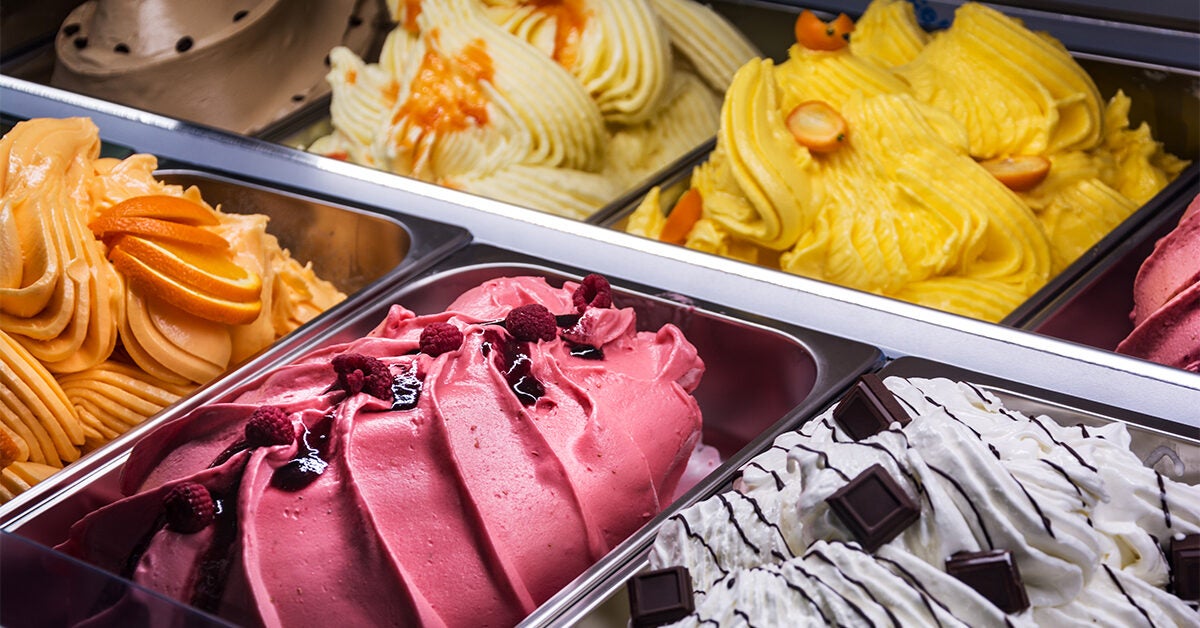 Gelato is a popular frozen dessert that originates from Italy and is enjoyed by many people around the world.

While it’s similar to ice cream or frozen yogurt, it isn’t made the same way. As such, you may wonder whether gelato can fit into a vegan or vegetarian diet.

This article examines how gelato is made and whether it can be considered a vegan- or vegetarian-friendly food.

While a vegetarian diet may allow for eggs, dairy products, or both, a vegan diet excludes all animal-derived foods and ingredients. Thus, gelato may or may not fit into these diets depending on how it’s made.

Gelato is custard-based and made with dairy (milk, cream, or both), sugar, air, and flavorings. Some gelato contains egg yolks, as this is a traditional way to make it, but most recipes today are milk-based (1, 2).

To make gelato, dairy and sugar are combined in equal amounts and pasteurized, after which the flavorings are added. A small amount of air is churned into it before placing it in the freezer (1, 2, 3).

Although the word gelato may make you think it contains gelatin, a protein derived from animal skin, bones, and connective tissues, it isn’t a typical ingredient. However, it’s always best to look at the ingredient label to be sure.

Also, gelato doesn’t always contain eggs, but ice cream often contains egg yolks as a fat and stabilizing agent. Gelato typically gets its flavor from natural sources and is served at 10–15°F (6–8°C), which is warmer than the serving temperature of ice cream, to improve flavor (1, 2, 3).

Gelato is appropriate for most vegetarian diets, as it doesn’t contain animal flesh. Still, if you follow a vegetarian diet that excludes dairy, eggs, or both, gelato may be unsuitable for your eating pattern. Moreover, most gelato is not vegan-friendly.

Gelato is typically made using milk, sugar, flavoring, a small amount of air, and sometimes eggs. While it can fit into most vegetarian diets, gelato is not vegan-friendly due to its animal-derived ingredients.

While most gelato on the market won’t be completely free of animal-derived ingredients, some vegan brands aim to make a 100% plant-based version, including:

You can also make your own vegan gelato at home using an ice cream maker and recipe like the one below.

While traditional gelato is not vegan, a few brands make versions of the dessert without using any animal-derived ingredients. You might also opt to make vegan gelato at home.

Gelato is a tasty, frozen dessert similar to ice cream but with a creamier, denser texture. Most gelato is made using milk or cream, sugar, a small amount of air, and flavorings. Some gelato may also contain egg yolks.

As such, most gelato is vegetarian-friendly, unless you exclude dairy, eggs, or both from your diet. Still, gelato would generally not fit into a vegan diet.

However, some gelato brands make vegan versions. Alternatively, you can make your own vegan gelato at home.

Eating out is fun even if you have diabetes: Just be smart about it – TheHealthSite