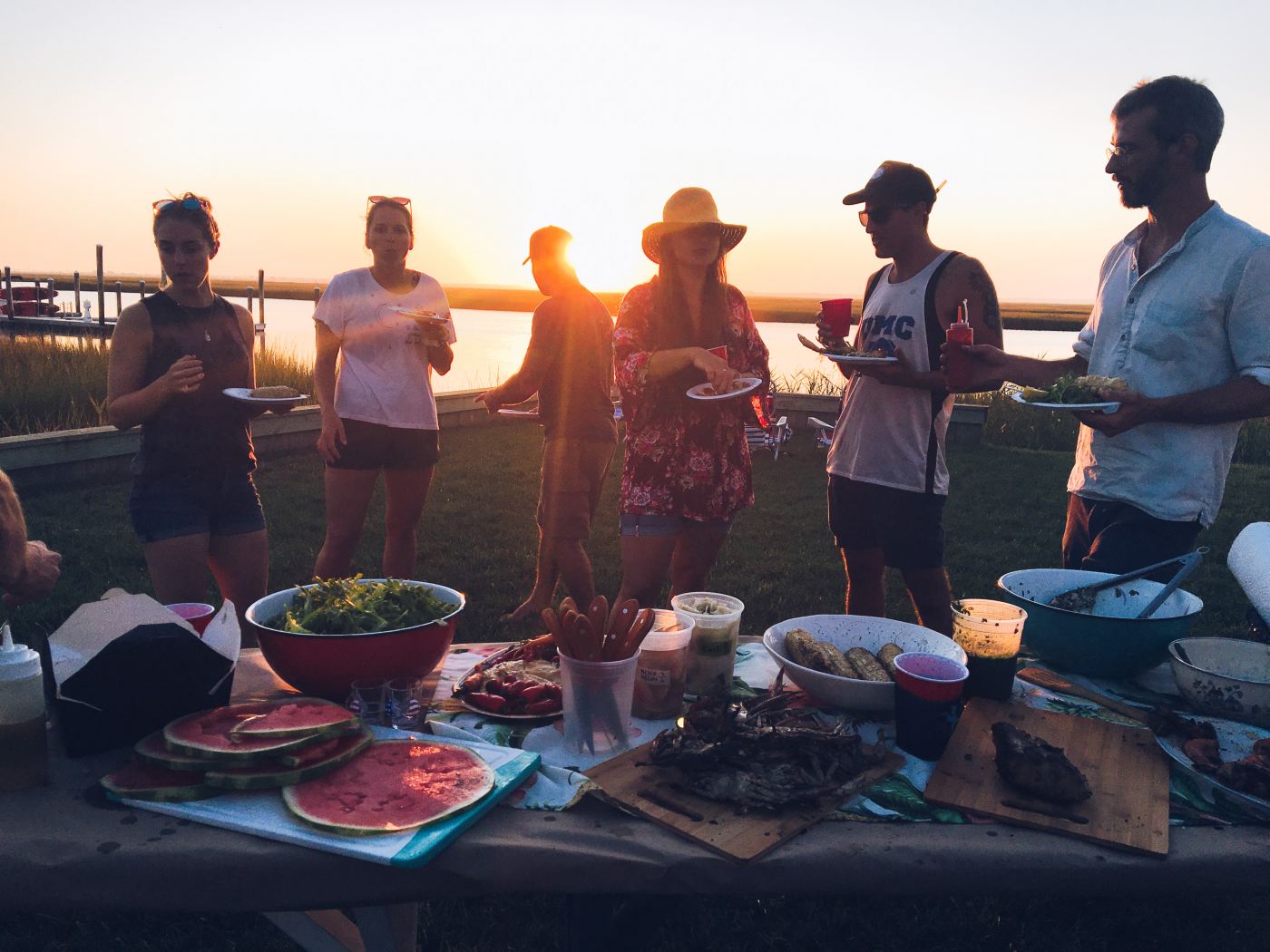 In addition to being a livelihood, creating dishes and feeding people is practically a part of any chef’s DNA, and many are finding ways to feed us while feeding their souls, too, during this time of dramatic upheaval. The new formats may not all be traditionally accessible, but these are not traditional times, and many Garden State chefs are showing a different side of their creativity. Their flexibility has made them and their food available still to many of us, sometimes in new and different ways. 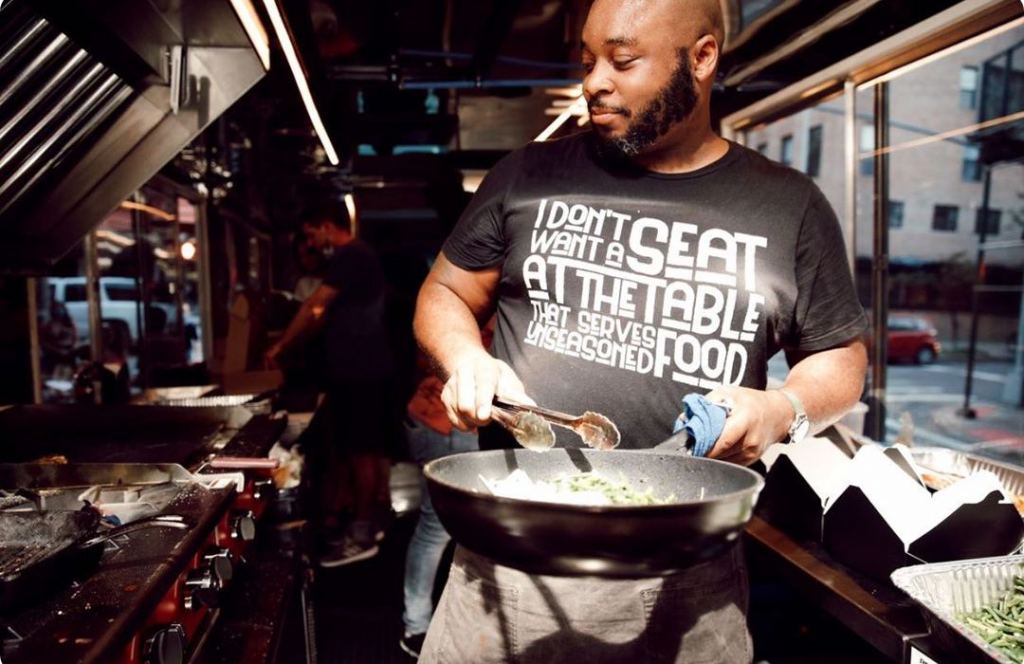 Chef Kwame Williams, the former executive chef of Vital in Montclair, has kept going during the pandemic by doing private dinners. Photo courtesy of Kwame Williams

When chef Kwame Williams closed his restaurant Vital in Montclair last year, he had no idea his ability to wear different hats would be so vital today. Combining finer dining skills from time spent in the kitchens of some of the most highly regarded restaurants in New Jersey, Williams used Afro-Caribbean influences and a healthier cooking approach to create a menu that often punched well above its price point. He and his co-owners, his two sisters, created a lively and casual atmosphere that differed from many restaurants in the town’s highly competitive food scene. While serving as executive chef, he also worked ongoing gigs as a private chef and did special events for organizations like the James Beard Foundation.

He and his sisters have since been considering options for opening a new place with a new format, although plans have stalled due to the pandemic. In the meantime, Williams has kept current by doing private dinners, being on the roster of a select group of African-American chefs for a recently launched virtual supper club concept, taping instructional Zoom webinars and videos, and has added a new hat — food photographer. A handy interest he developed as a chef has provided some new opportunities as he has been asked to do food shots for a prominent delivery service, but he will never be too far away from a kitchen. 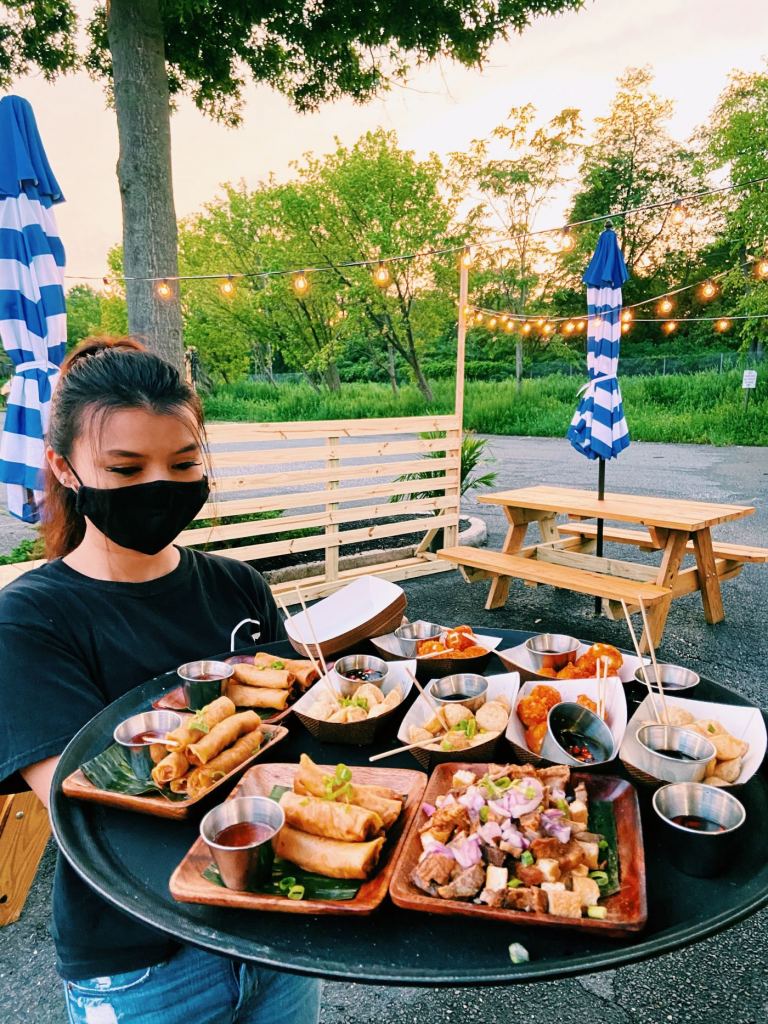 Reyta’s Filipino Cuisine in Cherry Hill opened for business last November but still garnered mentions on Best New Restaurant lists. A mother and son team, Everlinda and Mark Reyta, converted a former bowling alley into their bright and cheery space, which matches much of the food on the plate. They also are co-chefs (along with Mark’s wife), offering a broad range of classic Pinoy dishes and treats. The restaurant provided catering services and a brisk takeout business, which helped when they had to format their menu to takeout and delivery only before being able to open with limited outdoor seating.

There is a communal aspect to some of the traditional food offerings that have had to be amended because of the pandemic. Boodle Fight, or a large spread of food laid out on a bed of banana leaves that is eaten kamayan-style (Filipino for “eating with hands”), reappeared on the menu but the layouts were smaller because of dining group size limits — yet still striking to see and delicious to eat. 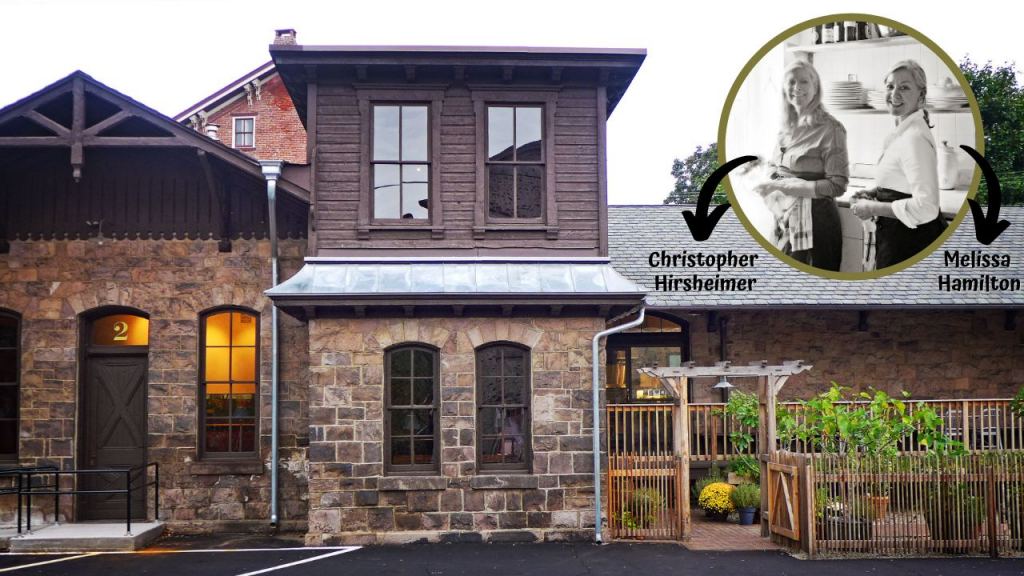 Also newly opened in 2019 is The Canal House Station, which received a James Beard Award nomination in its first year for Best Chef – Mid-Atlantic Region, and is the first restaurant from Christopher Hirsheimer and Melissa Hamilton. Hirsheimer and Hamilton are not newcomers to the food scene and, in fact, they have helped shape it in a prominent manner. They were respectively the co-founder and food editor of Saveur magazine and left in 2007 to start The Canal House, a Hunterdon County-based publishing and design company. They brought that venture’s focus on better home cooking to the new restaurant, which serves breakfast, lunch and Sunday supper in a restored 150-year–old train station in Milford.

Since closing in March for sit down service, the restaurant has reopened for limited takeout Thursday through Sunday on a pre-order basis, but perhaps the greatest gift the chef-owners have provided New Jersey eaters during these months are the foundations of The Canal House: their cookbooks focused on better home cooking.

Authors of numerous cookbooks and past winners of a Beard Award for their 2013 “Canal House Cook Every Day,” they found themselves early in the pandemic on many recommended book lists for those following stay-at-home orders and trying to rediscover (or discover) the use of their own kitchens. While their food continues to provide pleasure on a limited takeout basis, the influence of their “Canal House Cooks Lunch” blog and their cookbooks has allowed an even broader audience to connect with them. 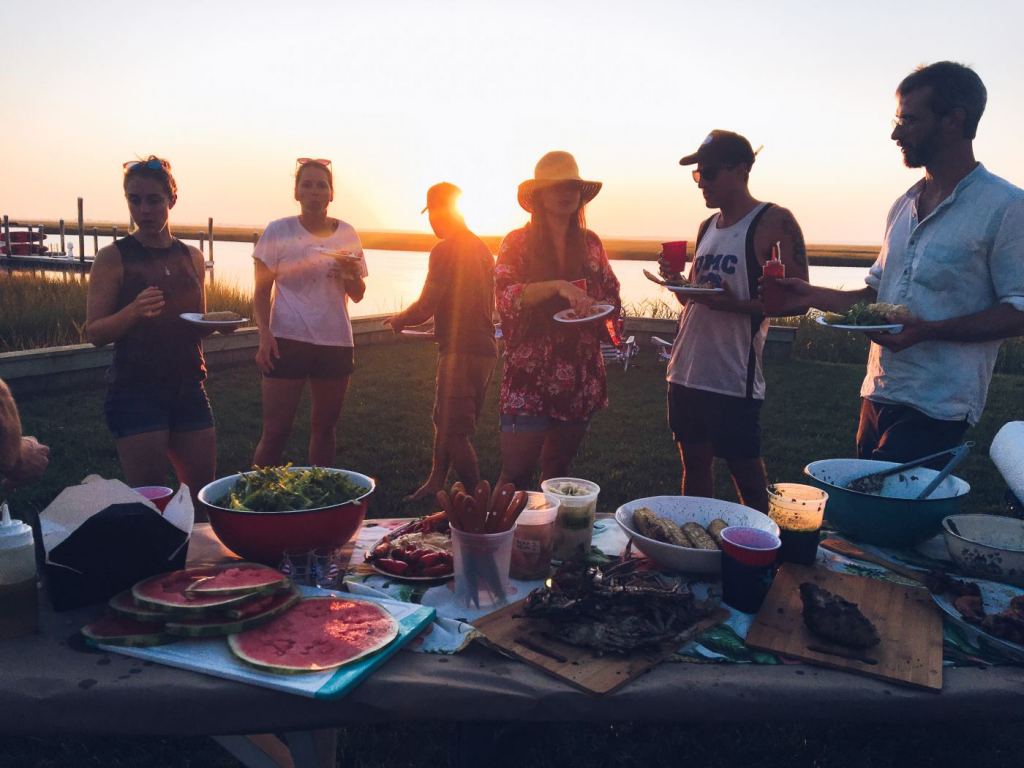 Heather Sedlacek and Connor Dore, far right, have made waves in Avalon with their ‘Summer Salt’ pop-up dinners, which has exploded in popularity and is something they started in the summer of 2019 as a way for them to enjoy a summer at the shore. Photo courtesy of Heather Sedlacek

Collaborative efforts are nothing new, but there may be no stronger bond than the one between meat farmer Heather Sedlacek and chef Connor Dore. They are not only married to their work but married to one another. The business and life partners have made waves in Avalon with their “Summer Salt” pop-up dinners, something they started in the summer of 2019 as a way for them to enjoy a summer at the shore in Sedlacek’s native state while living in North Carolina. The dinners developed such a following, it prompted the couple to explore putting down roots here. What transpired between last summer and this summer, though, changed some of their plans and put other new ones in motion. In such a changeable atmosphere, they are pivoting so much that many observers might think they are dancing.

Summer Salt was fully booked through mid-September, and if all goes well, will continue in some manner into the fall. Sedlacek and Dore have teamed with Rhianne and Justine Lowe of Isabel’s Bakery and Café in Avalon, who host the dinners at their place in addition to their own busy operation. Also important to the relationship is Cooper Brothers Market Garden in North Cape May, who not only provide Dore with all his seasonal produce for these dinners and private in-home dinners, but also a home for Sedlacek’s poultry operation.

With so much change happening, the couple moved away from looking to open a brick-and-mortar restaurant and recently purchased a 23-acre farm in West Cape May. Their belief is that investing in the land is a more “certain and resilient” way to expand their vision. Bayleaf Farm will be a space where grower meets maker as they create an integrated food community over time. Sedlacek will continue to raise chickens and hopes to expand into raising pigs and ducks while Dore sees it as an agritourism destination and location for special dining events. “We are proud that we have been able to hold our values consistent throughout all the changes and provide high-quality food and service in any manner,” Dore said. “If we look like we’re dancing, it’s our customers that provide the music.” 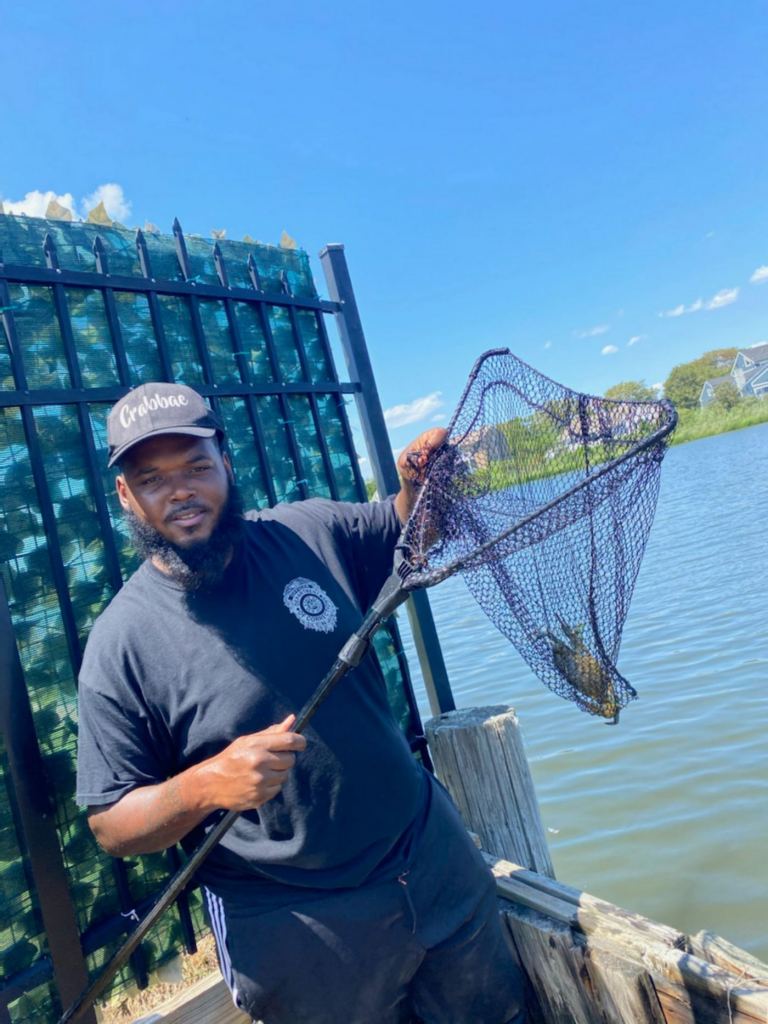 Chef Kashif Jones had waited tables, operated a hot dog stand and owned a food truck but could never get the momentum he had hoped for until a few weeks before the shutdown when he opened Crabbae in Maplewood. Photo courtesy of Kashif Jones

Speaking of dreams and visions, in Essex County one such dream has become reality in Crabbae, a popular seafood takeout restaurant specializing in crab preparations. Chef Kashif Jones had waited tables, operated a hot dog stand and owned a food truck but could never get the momentum he had hoped for. A little over a year ago, he had a vision for Crabbae, cooking out of his Newark apartment with as many as 100 orders some nights that required running the orders down to the street for waiting customers.

Outgrowing the apartment space (and probably tiring of all the time spent up and down the stairs), he committed to opening a Maplewood storefront – just weeks before the shutdown. But his ability to bring his dream to fruition despite the timing was due to the takeout nature of his business at a time when many restaurants had to stop seating customers. Another reason for his success is his self-claim of “always hustling.” Jones also has wisely used social media to not only promote the business and menu but to keep his loyal and large group of followers tuned in to his future plans. His work ethic and gratitude are on display almost daily on Instagram Live for all to see.

In less than six months, Crabbae expanded into the space next door, and there is talk of a second establishment to include seating. When asked about his dream becoming a reality, Jones said, “I realized I wanted to make the food I make because it brought people comfort and it made them happy.” Although this was his vision a year ago, they are words to live and eat by these days, for sure.

Food enterprises: In keeping with standards – The Financial Express