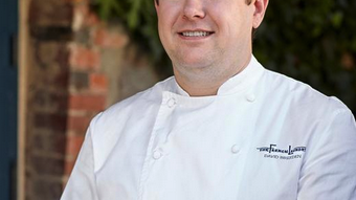 Early Thursday evening, I did something I’d never done before (an interview via the computer program Zoom with someone all the way across the country), and heard words I did not anticipate from the head chef at a sophisticated three-star restaurant owned and operated by Thomas Keller, a legend in the world of fine dining.

The man I interviewed was not the famous Keller, but the “chef de cuisine” at Keller’s restaurant in the wine country of California. The French Laundry restaurant is in Yountville, California, and is a sister establishment to Manhattan’s famous per se restaurant (they spell out that name in all lowercase), also Keller’s.

The words spoken to me by that well-situated chef de cuisine Thursday were these: “I love Tipton’s Cafe.”

Yes, that Tipton’s Cafe. The one down on Depot Street. He then asked me if the Bean Barn is still around. I told him it had closed briefly, but now is open again.

He’s glad, because he’s a Bean Barn fan, too.

That’s a doozy of an endorsement for both those iconic Greeneville eateries – and it comes all the way from the other side of the country, and from somebody who knows what he is talking about regarding food.

Who is this guy? He’s David Breeden, who heads the kitchen and menu planning operations at the French Laundry restaurant in Yountville, California. David was born in Washington County and grew up in Greene County into his teen years.

Tipton’s and The Bean Barn were eateries he sometimes visited in his youthful days as a student at Greeneville High School and skateboarder on local streets and sidewalks. At age 14, though, he struck out on his own, leaving Greene County with only $21 in his pocket and no fixed roadmap into his future.

Chef David has come a long way since his days as a “rough” kid, as he calls his youthful self.

Next Saturday’s column will trace his unlikely, yet seemingly providential path away from Northeast Tennessee into Knoxville, Charleston, New York and finally California, working in restaurants along the way.

It will also locally introduce a high-end new book being released later this month that will include some of David’s recipes.

There’s even a bit of Greeneville in the book. More about all that next Saturday.

I decided to write today’s column partly to introduce and “tease” next week’s column a bit, but mostly to spotlight something Chef David told me that he wants to say through his hometown paper: the positive influence three particular Greene County men had upon him when he was young and “searching for direction” in his life.

Those men are 1) David Crum, a bike-riding Greeneville policeman and drug education leader at the time, and later Greene County mayor; 2) Cameron Spradlin, a youthful GPD officer when David knew him and now a GPD lieutenant and K-9 commander; and 3) Paul Rose, at the time a local coach and teacher.

All three of those men “really had a positive impact” on David, he said, adding that they may not realize how important they were to him. That’s why he wanted to be sure their names and influences were highlighted in whatever I wrote. I’m happy to oblige.

As David describes it, things the three taught him came back to mind as he became an adult, and helped him grow past the youthful stage in which “everything was moment-to-moment” and thinking ahead was largely neglected.

“I went down a pretty rough path, searching for direction,” he told me Thursday. The lessons he learned from those three and others (including Keller), contributed to a personal and professional growth philosophy David promotes in his kitchen and community to this day: “One percent improvement every day.” Those small steps add up over time, you see.

Next week’s column will present more of David Breeden’s unusual story, including more details of his Greene County life, family and associations, and a look ahead at the new Thomas Keller book in which some of David’s best work is spotlighted.

It will also delve a bit into how being a Tennessean is fundamental to almost everything David does, why he is at heart a “steak and potatoes” kind of guy, and what dish this highly trained and talented chef considers one of the world’s best.

The takeaway that wants to be healthy by stealth – The Guardian