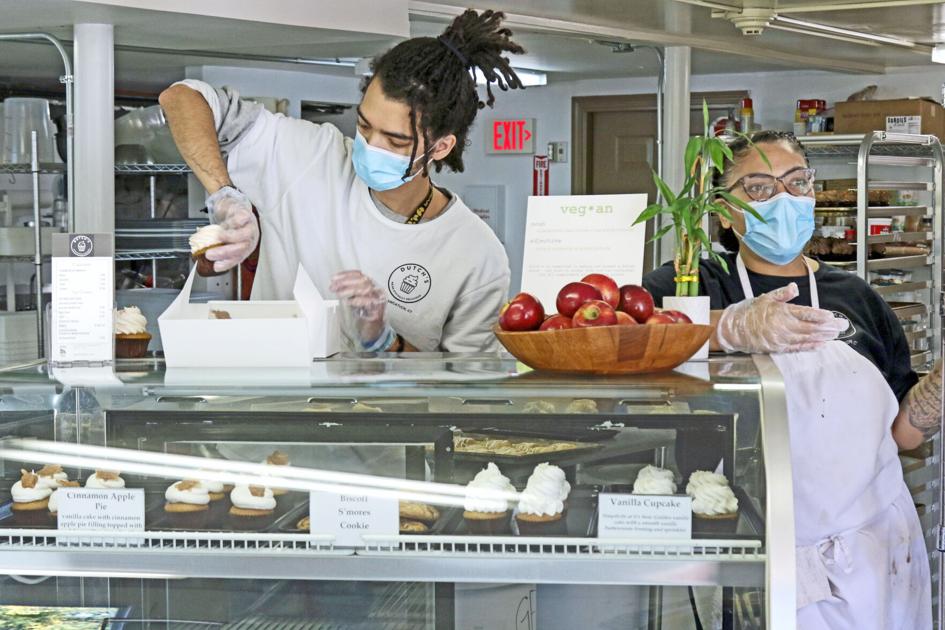 PAWCATUCK — Tiffany Shultz stood next to a gleaming glass bakery case filled with giant cookies and cupcakes one morning last week inside Dutch’s, her vegan bakery.

Dutch’s, a small, tidy “ethically delicious” bakery at 2 Prospect St. in Pawcatuck, is named for Shultz’s 19-year-old son, Jake, who works with his mom and was standing nearby, wearing gloves and a mask, waiting on customers and refilling trays with freshly-baked cupcakes with names like “Peaches & Vanilla Bean,” “Pumpkin Spice,” “Cinnamon Apple Pie” and “Raspberry Fudge.”

“His nickname is Dutch,” said a smiling Shultz with a nod toward her son. “My brother gave him the name. He’s called him Dutch since he was a little kid.”

Jake is also the inspiration behind the business, which Schultz calls “a dream come true.”

Born and raised in Groton, Shultz graduated from Ella T. Grasso Technical High School where she studied culinary arts. Although her plan had always been to open and own her own restaurant, Shultz took some detours but always remained involved in the food industry. A former dispatcher for both the Groton and New London Police Departments, she said she “always kept one foot in the world of food.”

“I’ve done everything from waitressing to cooking to bartending,” she said, “all while working full time.”

In 2016, when Jake was diagnosed with myasthenia gravis — an incurable neurological autoimmune disease — Shultz connected with the Myasthenia Gravis Foundation of America. Two years later, she got involved with the organization’s “Walk for a Cure” fundraiser. Rather than asking people for donations, Shultz decided to sell cupcakes and give the money to the nonprofit.

She developed a huge and loyal base of cupcake-loving customers who urged her to bake more of her vegan goodies and sell them. She took their suggestion and began baking at night and selling her cupcakes at farmers markets and at La Belle Aurore in Niantic — whose owner is a friend and who allowed her to use the kitchen after hours — and at the Café Otis in Norwich, which has since closed its doors.

“We also launched a website and took orders,” she said. “Sometimes we’d have people meet us in parking lots to pick up their orders.”

Shultz, who has been eating a plant-based diet for about a decade now, said she was never  too fond of meat when she was growing up, but once she started educating herself about food, it “just made sense to become vegan.”

“When I learned of the health benefits and the benefits to the environment,” she said, noting what a strain the animal-based diet places on the planet, “I made the decision to be vegan.”

Also, she added, eating a plant-based diet is helpful to people with autoimmune diseases, like her son.

“There are so many good reasons to do it,” Shultz said. “It’s not just about tofu and kale. I like to have fun with food. We should enjoy our food … food should be delicious.”

“They helped me create a business plan and look for funding,” said Shultz, who also found a perfect place to open a bakery in Groton City. She applied and received preapproval for a Small Business Association loan, and things were rolling along in the right direction when COVID-19 hit.

“I got a phone call saying there was no more funding,” she said. “So, we all went back to work.”

Until, Shultz said, she stumbled upon a Facebook Marketplace post alerting her to a small shop with kitchen equipment that was available.

“I knew as soon as I walked in and saw the oven and the fridge,” said Shultz, who in addition to selling cupcakes also offers enormous cookies and vegan, gluten-free, nut-free soft-serve milk shakes, ice cream floats and ice cream that can be served in gourmet waffle cones and comes in flavors like French vanilla, red velvet, and orange creamsicle with unlimited toppings.

The cookies, a full “quarter pound of of buttery crisp edges with a chewy center,” recently added to the menu, have been quite popular, said Jake.

Shultz said as soon as word got around that she was planning to open a bakery, a flood of support poured in.

“We met so many people,” she said. “This community is amazing. There was a lot of interest and a lot of support.”

One of the first people to contact her, Shultz said, was Lisa Konicki, president of the Ocean Community Chamber of Commerce.

Konicki told her about a grant program sponsored by the Chamber One Fund, she said, that offers complimentary memberships to new businesses.

The grant, Shultz said, “was monumental in helping us get our name out there.”

Konicki described Shultz as a “a very energetic and hard-working woman.”

“It is so exciting so see someone have her dream of owning her own business come to fruition,” said Konicki. “We are thrilled that we have been able to help her.”

In addition to awarding Dutch’s a $659 cash grant, the chamber gave her free face masks and hosted an in-person ribbon-cutting ceremony where roughly 30 people gathered outside the bakery, all wearing masks and appropriately socially distanced.

“Tiffany has incredible perseverance,” Konicki told the crowd, “and an incredible family … every one of whom has put their fingerprint on this. Thank you for choosing Pawcatuck as your home.”

“We couldn’t be happier,” said Shultz.

Dutch’s is open Thursdays through Sundays, and call-ahead, curbside pick-up is available. The number is 860-271-1569.