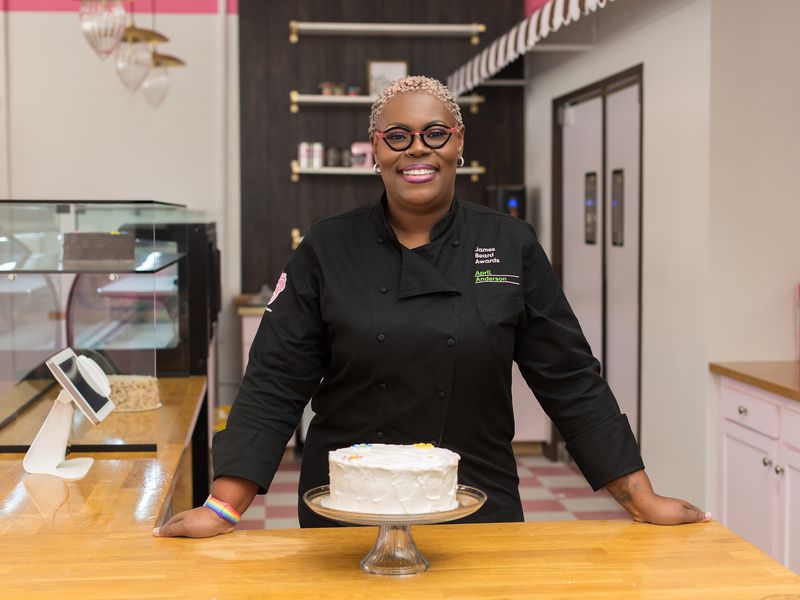 When the coronavirus pandemic hit in March, Good Cakes and Bakes owner April Anderson was ready.

Anderson, who opened the shop in 2013 at 19163 Livernois Ave. in Detroit, said the first two weeks of the shutdown were slow, mostly because regular customers and others weren’t sure if they should be eating out. The bakery saw a 52 percent dip in sales over the first few weeks of the pandemic.

“Nobody was sure how to react to (the pandemic),” said Anderson, a 47-year-old Detroit native.

Things turned quickly, though. Anderson and her staff began to focus on online orders and deliveries. From March 17 to Sept. 4, the shop, which specializes in organic baked goods and offers retail items and a space for community events, filled 20 online and 80 call-in orders each day. The company delivers as far west as Ann Arbor and as far north as Shelby Township.

Having an already established online presence was key, Anderson said.

“We’d been working to get up and running online for two years,” said Anderson, who during the pandemic put some of her products in local grocery stores to increase sales. “When we first opened, there wasn’t a lot of walkable traffic, so we needed to be able to get to our customers in other ways.”

That foresight is what kept the business afloat during an uncertain time, Anderson said. Good Cakes and Bakes has stayed busy throughout the pandemic. The business did not lay off any of its nine employees, Anderson said, though two left after contracting COVID-19.

Detroit resident Tracy Cone, who has worked at the bakery for four years, said she didn’t notice a slowdown in production even as it was forced to shift its business model for a while.

“It felt like we were 10 times busier just based on the number of online orders and deliveries,” Cone said. “I learned a lot of different aspects of the business, too. I was out making deliveries and not just taking orders inside the bakery. I had no idea the reach the business has.”

Cone, 20, is a junior at Michigan State University. Upon her return home in May, she had a job waiting for her. Cone recognizes how fortunate she was given the current state of affairs.

“I know a lot of people wanted to work but nobody anywhere was hiring,” Cone said. “We’ve all worked really hard during (the pandemic). I think it shows by how well the business has performed.

“One important thing is that (April Anderson) assured us she’d keep us all safe. She really cares about all of the employees and we care about her, too.”

Good Cakes and Bakes was able to bank the cash from online sales and deliveries to help cover operational costs. A $62,000 Small Business Association Paycheck Protection Program loan covered salaries and allowed Anderson to give her staff more hours. Payroll is a big part of expenditures, Anderson said. She said she starts her employees at $15-$18 an hour. The bakery, now with two of its own delivery trucks, has brought on two new employees and ships nationally via Goldbelly.

“We didn’t miss a beat,” said Anderson, who has seen a 10 percent bump in business over the last seven months despite going from being open five days a week to three. “Our retail staff was down at the beginning, but our bakers continued to work a full schedule and now we’re able to keep them at full-time hours.

“With a lot of other businesses being closed, we were filling orders for a lot of companies that were feeding frontline workers. I think the gain we’ve seen is because we were able to pivot so quickly and we already offered delivery and we already had a website.”

That presented an issue, however. The Good Cakes and Bakes kitchen was just 250 square feet — enough space for one person to work. To keep up with demand, Anderson and her staff needed more space.

So Anderson, who owns the space with her wife, 57-year-old Michelle Anderson, set out to do a complete remodel, including increasing the size of the kitchen to 790 square feet. That allows four bakers to create at the same time.

“We’ve been in this space for seven years. The kitchen was small,” Anderson said, adding the business closed for five and a half weeks during the remodel, which cost $75,000. “In order to have a larger kitchen, we thought we were going to have to open another location. But when (the pandemic) happened, we realized we had a lot of unused real estate.”

There’s still plenty of space for community-based events and for seating. “The pandemic just gave us an opportunity to sit back and re-evaluate our business model and how we were using the location,” Anderson said.

Anderson, who made a point to not take on any debt during the pandemic, earlier this year applied for and received $194,000 in grants, with a portion covering the cost of the remodel. The remainder of the funds went toward building the company’s online marketing presence and production.

During the pandemic, Anderson has faced limits on how much of a particular item she could buy, while also increasing costs. For example, prior to the pandemic, Anderson could purchase 60 pounds of butter at a time. Early on in the health crisis, she could only get a maximum of 25 pounds. For a short time, Anderson paid higher prices in order to get ingredients in a timely manner.

Anderson is excited to welcome customers back into the store after a grand reopening Oct. 17. With its bigger kitchen area, the shop is now able to offer sandwiches and salads, Anderson said. Good Cakes and Bakes will also offer cooking classes for adults and children, she said.

“It’s more than a bakery,” Cone said of the shop that remained busy from open until close during its reopening. “We make a lot of sales, but it’s a place where people can meet and discuss different things and feel safe.”

Anderson said she recognizes the impact the pandemic has had, especially on Black and Brown people. Her mother and grandmother were hospitalized with COVID-19. Her father contracted the illness, too, but was asymptomatic, Anderson said.

Even with all of that, the small-business owner has been able to find a silver lining.

“The last few months have definitely been a blessing for our business,” said Anderson, adding the shop will host and facilitate discussions related to social issues. “We realized we were doing some things wrong that were costing us money. Now we’re streamlining a lot of our processes, and we’re able to cut labor costs by having four bakers work at once. It feels like the sky’s the limit now.”

Could this be Michigan’s Best chocolate cake? – mlive.com

Free pizza and a 75-foot statue of Elon Musk: The battle for the next $1.1 billion Tesla plant – CNBC

Minneapolis Food Drive Helps Kids Who Are Without Food After Grocery Stores Are Looted, Destroyed – PEOPLE