My first meal in Tbilisi was kharcho. It was probably my third, sixth, 10th and certainly my last meal too. It is a meat dish of soup or casserole consistency, but I hadn’t tasted anything like it before. Walnuts are a key ingredient in Georgian cookery, but spices I now know as blue fenugreek and marigold gave me a completely new taste experience. Nestled between Asia and eastern Europe, Georgian food takes inspiration from both, including a liberal use of pomegranate. I’ve attempted kharcho at home, but it’s been easier to recreate the memories of Georgian supra (feasting) by buying their wine. Georgia’s officially the world’s oldest wine-making region, and it’s very good.
Karen Knight 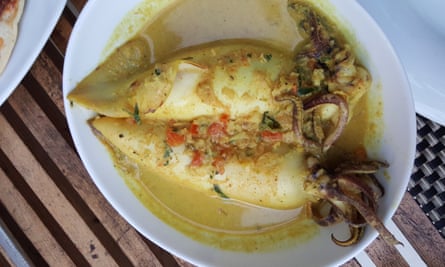 It was Boxing Day 2017, at a guesthouse under the palms of a somewhat secret (truly!) bay on the south coast of Sri Lanka. The house was simple, but every meal was fit for royalty. This dish of fresh squid stuffed with potato curry was the crowning jewel: aromatic, tender and filling, but so fresh and clean. Our younger daughter and I were so won over by the food here that we asked if we could sneak into the kitchen to watch the chef at work. Ever since, I’ve cooked dal her way, the Sri Lankan way: everything goes in the pot together without water: the coconut milk carries all the liquid needed to infuse the lentils with tropical goodness.
Alex 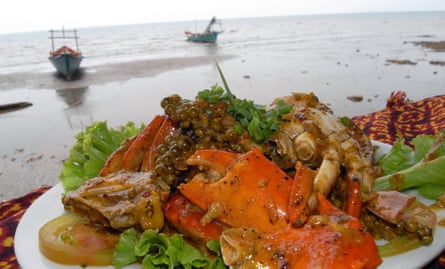 Whenever I use Kampot pepper (which is a certified geographical indication product) in home cooking, it always evokes memories of the first time I ever tried it: cracking open the shell of a freshly caught crab, and dipping its flesh into a simple dressing of ground pepper and lime juice during a Christmas spent in Cambodia. The pepper itself is aromatic and fragrant, like no other pepper I’ve tried, and the acidity of the juice makes the crab meat taste almost sweet. The town of Kampot is built along a river, and boasts the twin charms of French-inspired architecture and the proximity to the Bokor national park.
Erin Niimi Longhurst

Pasta but not as we know it, Lombardy 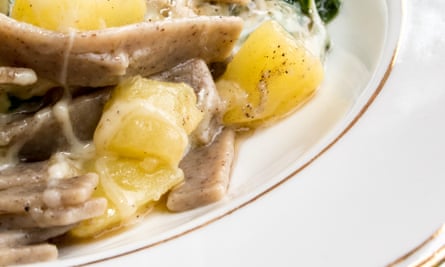 “When’s the next train to Milan?” I asked at the tiny station in Tirano, near the Swiss border in northern Italy. “In eight hours,” came the reply. Then the ticket seller told me: “I will take you to my sister’s ristorante to eat pizzoccheri.” An hour later we were walking up a verdant hill to a village trattoria under bright blue skies breathing in sharp lungfuls of mountain air that increased my appetite. In a rustic wood-roofed ristorante with a log fire, waiters were carrying steaming plates of thin black buckwheat pasta, topped with butter, garlic, potatoes, chard and melted local casera cheese to hungry customers. I was offered some local inferno wine and sat down to the best train wait of my life.
Peter 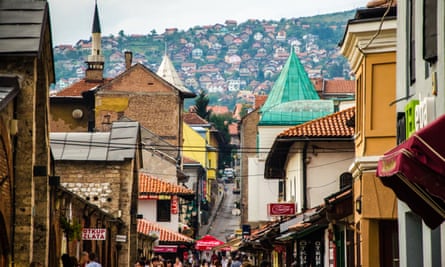 Although the Balkan countries are diverse, ćevapi is ubiquitous: minced meat (beef, lamb or pork or a mixture), shaped into fat cigars and often served in portions of 10. Cheap and cheerful, they were our go-to meal on our six-week tour. We ate them in smart Serbian restaurants with linen napery and fine wines, wrapped in bread while walking down the streets in Sarajevo, and in Ottoman-influenced cafes in Macedonia. We ate them with chips, salad, kajmak soft cheese, or ajvar red pepper sauce. The recipes were as different as the countries, but were as unfailingly good and as diverse as our trip.
Roy Messenger

Luosifen rice noodles are a speciality of the city of Liuzhou, in south-west China’s Guangxi province, made with a curious blend of snail broth, mixed spices, chilli, peanuts and tofu strips among other mysterious veggies. As you arrive in Liuzhou, the scent of the broth from hundreds of hole-in-the wall restaurants around the city will fill your nostrils, lasting for the duration of your stay and beyond. It’s an unmistakable smell unique to the streets of Liuzhou that evokes memories of sitting outside during balmy south China summer evenings sipping beers while slurping the noodles and chatting the night away.
Owain Lloyd-Williams 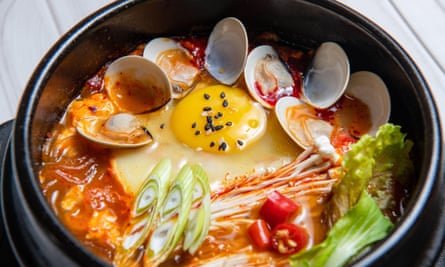 Chamchi jjigae or tuna and kimchi stew is an aromatic, deep red and spicy dish served bubbling hot to your table, usually with a side of boiled rice. The kimchi and tuna combine amazingly well with the intense spicy flavour to create a simple but satisfying dish that in Korea is both cheap and plentiful. When I lived in South Korea for four years it became a lunchtime staple for me. A few thousand won’s worth (£2-3) was enough to leave me feeling happy for the rest of the day, and I never had to walk far to get it. If ever I find decent-quality kimchi in the UK, this simple meal is my go-to. With a drop or two of soju, naturally.
Richard O’Toole 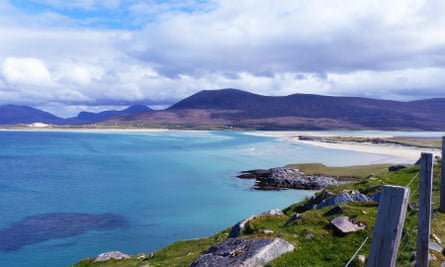 Arriving at Tarbert ferry port, we needed supplies. We stumbled upon AD Munro’s, a butcher and grocery shop by the harbour. A small counter at the back of the shop was adorned with hundreds of awards for prize-winning meat. With hunger in our bellies, we thought we would have a go at cooking haggis for the very first time that evening. AD himself kindly gave us instructions to ensure our first supper of haggis, neeps and tatties was a success. Washed down with a “wee dram” of course. It was a great night! Perfect warming comfort food after a day out in the Hebrides’ wild weather that has become an annual tradition whenever we visit.
Vanessa Wright 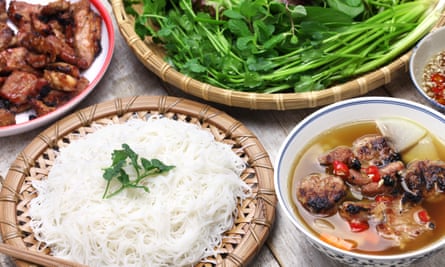 Bún chả dominated my trip to Hanoi in February this year (yes, I got back just in time). My local hole-in-the-wall eatery served only this dish, with a sea of colourful plastic chairs spilling into the road, as is Vietnamese tradition. Sweet flame-grilled pork, teamed with a woven tray piled with rice noodles and fresh herbs, a vinegary dipping sauce, small bowls of garlic and chilli, and – if you’re feeling fancy – a side of deep-fried quẩy (soft bread sticks). I ate it daily, and when I wasn’t eating it, I planned when I would be eating it. It’s so good you won’t even notice that you’re sitting in the middle of a traffic jam.
Oliver Clark 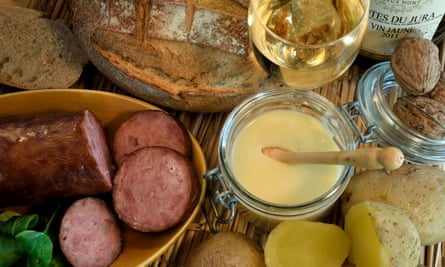 On a trip to the underrated Franche-Comté in eastern France, we sat outside an unassuming corner bistro called Iguane Café in Besançon. I ordered the plat du jour for less than €10, and what came out was a masterpiece. Slabs of hot morteau sausage, and a giant steaming dish of small roasted potatoes slathered in the runny cancoillotte cheese and local vin jaune. I vividly remember sitting in the September sunshine with family and good food, and the feeling of utter contentment. None of the ingredients are really found outside the Franche-Comté: they are far too sensible to let any leave.
Hannah Grist 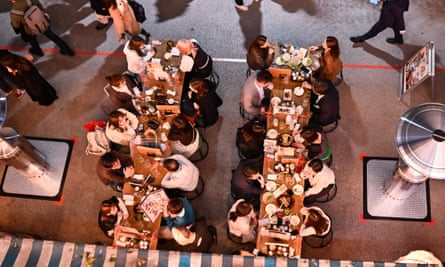 Tsukemen ramen, cold dipping noodles, transports me back to a cold winter evening in Tokyo. In a small restaurant called Tetsu in the central Shinjuku district, hungry Japanese office workers were slurping away at this dish that is hard to find in the UK. The cold ramen are dipped into warm thick broth with fatty pork belly and spring onions. On the side, you receive menma (made from tasty lacto-fermented bamboo shoots), a soft-boiled egg, some fried pork cutlet and extra onions. And if you have broth left over, you can request extra ramen. All of this for less than £9!
Ying Wai 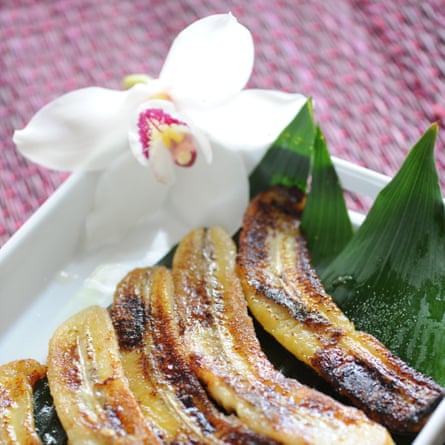 French colonialism has left a legacy of sweet teeth in Madagascar. Fancier establishments do a range of patisserie, but even the most basic roadside restaurant offers bananes flambées. The bananas are freshly picked, often cultivated in the restaurant garden. The sugar is rich and brown. The aroma of locally grown vanilla and cinnamon waft from your bowl. Pirates fled here from the Caribbean – perhaps they brought rum-making with them. The flames die away to leave a spicy rum sauce that has a depth of flavour beyond anything I have eaten in Paris.
Debbie Rolls