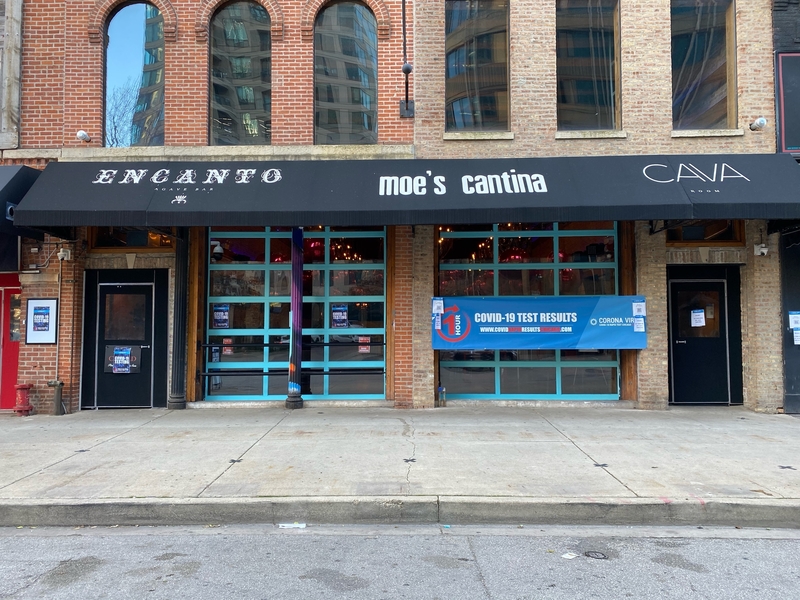 Moe’s Cantina has launched COVID-19 testing facilities at its locations in River North and Wrigleyville.

The new venture is a bid to help accommodate a surge in testing demand and keep some revenue flowing into the shuttered Mexican restaurant and tequila bar, said Michael Gonzalez, owner of Moe’s parent company Third Coast Hospitality Group.

“We just kept hearing from people that it was very difficult to get testing lined up,” he said. “We looked at that opportunity and are trying to fill that void.”

Gonzalez partnered with local internist Dr. Ronnie Mandal on the testing facility. They hired seven technicians to administer the tests, trained by Mandal.

The facilities are testing 30 to 50 people a day, Gonzalez said. The River North location launched the day before Thanksgiving, and the Wrigleyville facility opened Thursday.

The facility uses rapid-response COVID-19 antigen tests that return results in about an hour. It is not accepting insurance, and charges $135 for the test, Gonzalez said.

The price covers the cost of the test, personal protective equipment and the workers’ pay. Anything leftover goes toward rent, Gonzalez said.

“We’re not making a killing doing this, but … we are providing a service,” he said. “Am I able to pay full rent? No. But am I able to show my landlord I’m trying to do something? Yes. That keeps them happy for now.”

The number of COVID testing facilities increases each week, according to the Illinois Department of Public Health. As of Dec. 3, the department had been notified of 376 permanent testing sites in Illinois, and 81 in Chicago.

Restaurant operators throughout the state are working to add revenue streams to keep themselves afloat. Indoor dining shut down in October, and many closed their patios last month as COVID counts rose and consumers stopped showing up.

Gonzalez said he also bought a mask-making machine earlier this year and is considering launching a mobile testing facility.

Most restaurant operators having given up on turning a profit this year, but every little bit of extra revenue helps, said Angelo Eliades, founder and CEO of restaurant consultancy Creative Entertainment Concepts.

“The bottom line is, we still have rents to pay, we still have utilities to pay,” said Eliades, who also co-owns Rosebud Steakhouse in the Gold Coast. “We do need to create additional revenue streams.”

They also help shuttered restaurants stay on top of customers minds, and help them prepare for a reopening, Eliades said.

The name of the game right now for restaurants is just to stay alive, Gonzalez said.

“If you can do that, I think we’ll be very successful on the other end of it and bounce back fairly quickly,” he said. “But it’s been a very challenging road to get to the other side of this pandemic.”