How the coronavirus pandemic changes our shopping and dining habits? A new study reveals details following a survey on a total of 20,504 adults aged 18-74 in the United States, Canada, Malaysia, South Africa, and Turkey, and 16-74 in 22 other markets.

As health orders in many countries have called for sheltering in place and minimizing non-essential trips to curb the spread of the virus, consumers throughout the world report eating in-restaurant less often (63% on average across 28 countries) and shopping online more often (43%) than they did before the pandemic. However, buying locally – whether from local farmers and manufacturers, local businesses, or local restaurants – is largely unchanged compared to before the pandemic.

Globally, 63% say they are patronizing small and locally-owned restaurants less frequently than they did before the pandemic. However, a more varied picture emerges across regions and nations.

Latin America (79%) and North America (68%) show the greatest decline in in-person patronage of small or locally-owned restaurants. At the other end of the spectrum, just 54% are dining out less in the Asia-Pacific region.

Nations that have seen the most significant decline in eating out include Chile, Peru, Mexico, and Argentina, where more than 80% of consumers report dining in-person at locally-owned restaurants less often than they did before the pandemic. Among all 28 countries surveyed, Japan experienced the smallest decline. There, just 44% reporting eating in-person at locally-owned restaurants less often. 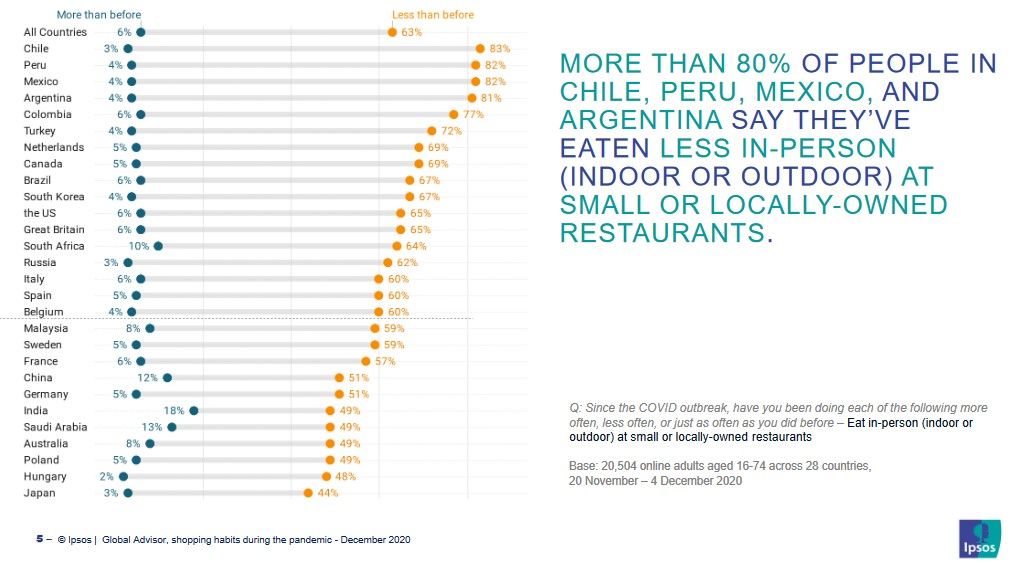 In parallel, there has been a shift to takeout and home delivery of meals. Globally, 23% of consumers report eating takeout and home-delivered meals from locally-owned restaurants more often, and 45% as often as they did before the pandemic.

Regions and nations where a higher proportion of consumers report eating out in-person at small or locally-owned restaurants less often tend to show higher-than-average percentages of people who now get takeout or delivery more often.

This suggests that while in-person dining is not an option, many are still supporting local restaurants through takeout or getting meals delivered.

Among individual countries, Japan again stands out for having the largest proportion of consumers reporting no change in their takeout and home delivery meal habits (72%), well above the global average of 45%. Hungary is second at 61%.

Globally, many consumers (58%) report no change when it comes to how often they shop in-person at small or locally-owned businesses. How often consumers are purchasing locally sourced goods is largely unchanged at the global level, with 61% saying they buy goods from local farmers or manufacturers as often as they did before the pandemic.

Japan shows the largest proportion of consumers who say that the pandemic has not changed how often they visit small and locally-owned stores (78%). In contrast, half of the shoppers in Turkey (54%) and South Korea (50%) report a decrease in the frequency of in-person shopping at locally-owned businesses, compared to a global average of 30%.

Less than half globally say they are shopping online more often (43%). Perhaps unsurprisingly, at a global level upper-income consumers (49%) are more likely to report having shopped online more often since the onset of the pandemic than lower-income consumers (37%). Access and availability of payment methods for online shopping may have been a contributing factor to this disparity. 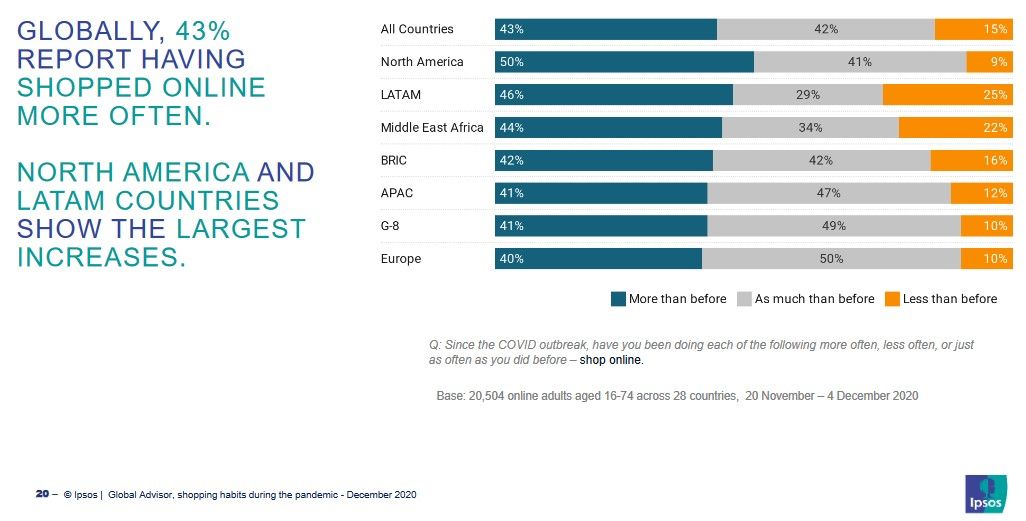 North America leads the global increase in the frequency of online shopping, with half of consumers in this region reporting shopping online more often. Latin America shows the second-highest percentage of consumers reporting an increase in online shopping (46%), but also the highest percentage of those reporting a decrease (25%), signaling that habits have changed dramatically in the region, but not all in the same direction. 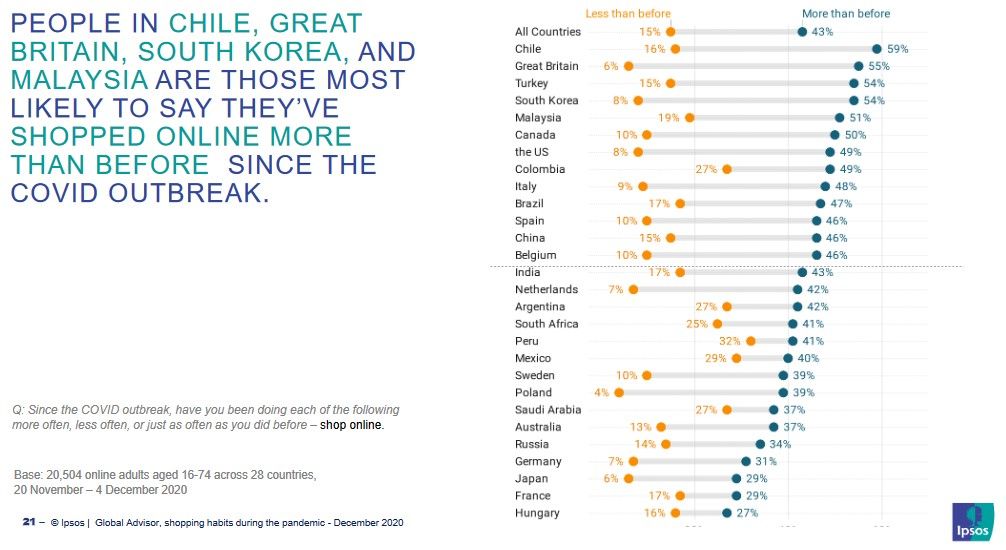 Can lab-grown food save the planet? – The Guardian