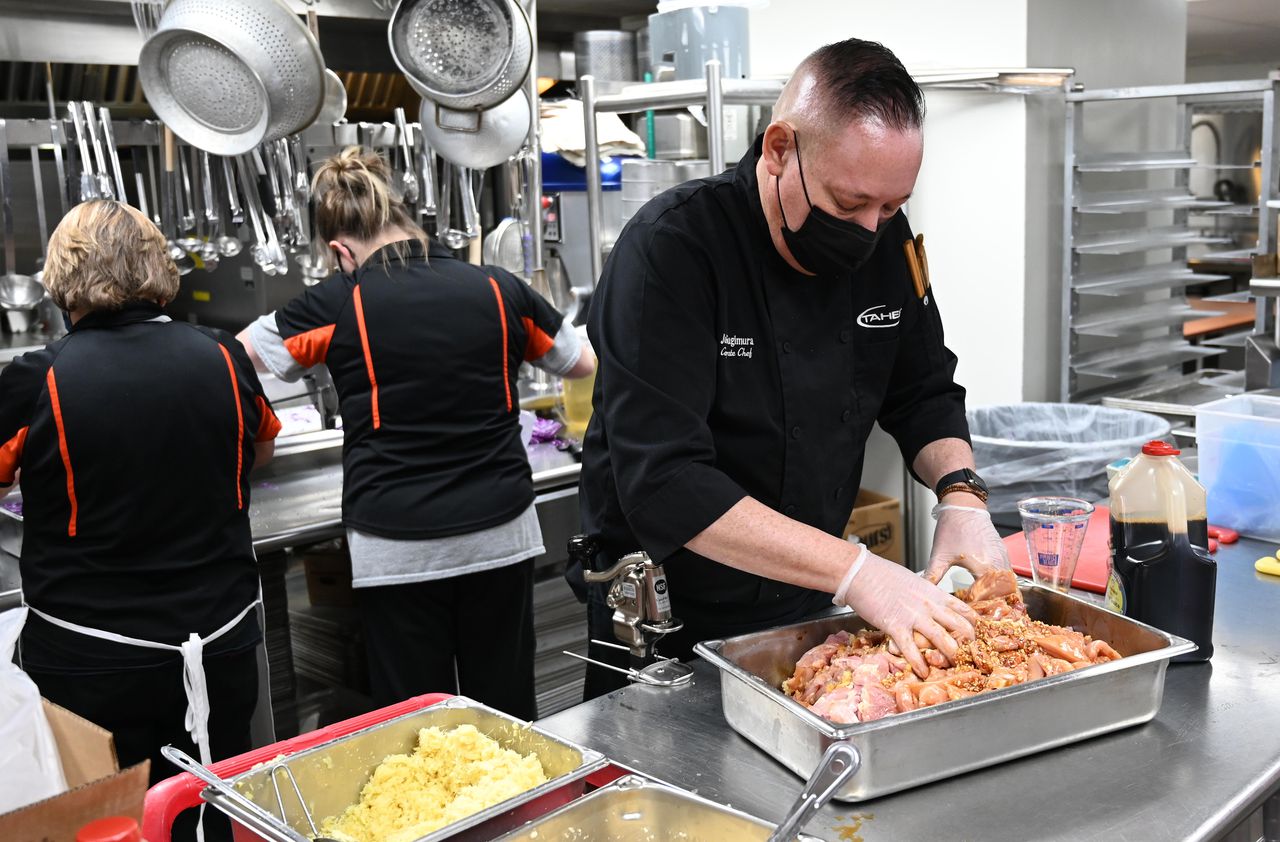 JACKSON, MI – The routine of their typical lunch food fare, like pizza and burgers, is about to change for Jackson High School students.

Chef John Sugimura is in town this week preparing the school’s kitchen staff to whip up the chicken karaage bowls he serves at his PinKU Japanese Street Food restaurant in Minneapolis, Minnesota. Students will get a taste of this more-than-100-year-old recipe passed down from his grandmother later this week.

“The meal we’ll be serving Thursday and Friday will be exactly how my grandmother would do it and she would be proud of it,” he said.

“I do it to share and give them a little snippet of Japanese Americans and broaden their world a little bit,” said Sugimura. “It’s really been quite magical.”

Sugimura has spent the last couple years traveling the country to schools, educating students and food service staffs about the benefits of using healthy, fresh ingredients and cooking from scratch.

Unlike the heat-and-serve dishes students are used to getting in a typical school lunch, Sugimura said his grandmother’s recipe tells a story that can be used to get them excited about trying different foods.

The chicken-based meal was made by his grandmother in her restaurant in Sacramento, California in the 1920s, up until World War II. In 1942, Sugimura’s grandmother and her family were forced to move to Tule Lake, California, where they were incarcerated in “assembly centers” for more than four years, he said.

Sugimura’s family eventually was able to leave the war camp and moved to Minnesota where he was born and raised. Being able to carry on his grandmother’s recipes, he said, is what has driven him as a chef.

“You would think I work for Taher because of my passion for food,” he said. “I work for for Taher as a corporate chef doing exclusively Japanese food so I can talk about the Japanese-American experience.”

Getting Sugimura to come to Jackson has been two years in the making after meeting him at a Taher conference in Minneapolis, JPS Catering Coordinator Steve Trout said.

“We never really got to experience anything like this,” said Trout, who graduated from Jackson High in 2007. “It’s kind of refreshing for me to bring that over here to get these kids to try new things and experiences from other parts of the world. I really try to press new, fresh ingredients that are healthy with great flavors.”

Sugimura’s visit is a welcomed change of pace for both students and food service crews, with a chance to try something “authentic,” JPS Food Service Director and Chef Manager Brant Russell said.

“It’s a great learning experience that will push some kids’ boundaries,” Russell said. “It will hopefully open their eyes to something different.”

With plans to serve around 600 students this week, Sugimura said the rewarding part of visiting students is engaging with and exposing them to something different.

“Most kids, at some point in their life, have been made to feel different,” Sugimura said. “This is one day where nobody is feeling different because we’re introducing them to a brand new everything.”

Sugimura will return to Jackson later in the spring to make another Japanese-inspired dish of homemade noodles with chicken and steak skewers.