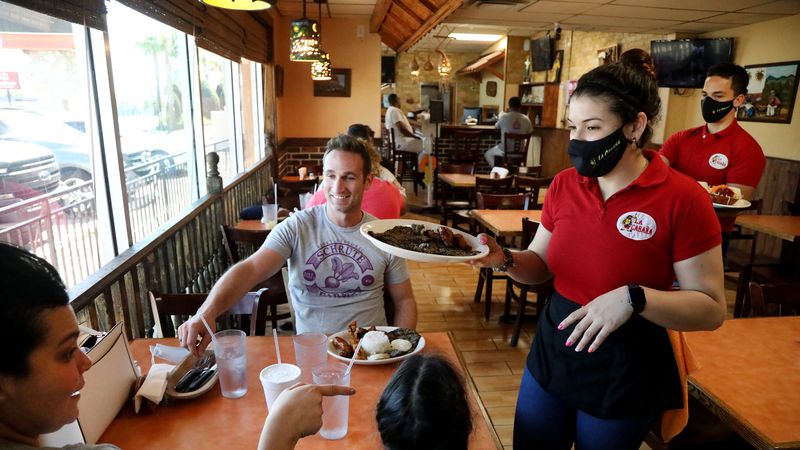 When the coronavirus pandemic hit last spring, La Cabaña Restaurant in West Tampa shut down. Plans to remodel and expand were put on hold.

“Like most people, our reaction was, ‘Let’s get a handle on this. Let’s close it down,’” said owner Jonathan Betancur. “Thankfully, we didn’t have to close it down for too long.”

Betancur, 33, applied for a Paycheck Protection Program loan, federally backed small business aid provided through the Coronavirus Aid, Relief and Economic Security (CARES) Act. Within weeks, his Colombian restaurant got a loan worth $82,650.

It helped. But not as much as it could have.

“Thanks to our community, we’re still here,” said Betancur. “The PPP is a great help, but it’s not going to keep your business alive long-term.”

Nearly a year into the pandemic, Congress is preparing another massive allocation of aid to restaurants and bars, part of the sector that’s seen by far the most job losses of any industry in the past year.

The first round of Paycheck Protection Program loans shepherded more than $42 billion toward food, leisure and hospitality businesses, according to U.S. Department of the Treasury data. The second round, which opened in January, made those businesses eligible for slightly larger loans than other entities.

The $1.9 trillion American Rescue Plan, which is expected to pass through the U.S. House of Representatives, goes a step further with a provision called the Restaurant Revitalization Fund: $25 billion in debt-free grants for a range of food and beverage businesses, from brewpubs and caterers to saloons, inns and food carts.

“We have included additional aid for restaurants, because they’ve been particularly hard hit,” said Rep. Kathy Castor, D-Tampa. “We’re afraid that maybe PPP, by the March deadline, will run out, and our restaurants will still be competing for those dollars.”

These “flexible, equitably distributed grants will help them get back on their feet and put the disaster behind them,” she added.

Grants would be based in part on the difference between a restaurant’s gross receipts in 2019 and 2020, and capped at $10 million per business. Approximately $5 billion would be given to smaller restaurants that brought in gross receipts of less than $500,000 in 2019. And for the first 21 days, application priority would go to businesses owned by women, veterans and those in socially and economically disadvantaged areas.

Richard Turner, general counsel and senior vice president for government relations for the Florida Restaurant and Lodging Association, called the grants “a lifeline … designed for folks that need it the most.” Even if other aspects of the bill end up changing, he believes the grants will survive.

“This particular provision will probably survive the fight between the chambers,” Turner said. “I think everyone feels good about it, and it’s a worthy cause, and I believe it’ll be faster than some other government programs.”

Unlike Paycheck Protection Program loans, the grants won’t be open to chains that own or operate more than 20 locations. Restaurants would be required to return any amount that exceeds their gross receipts during 2020, as well as any money that doesn’t go toward qualifying expenses such as payroll, rent, utilities and food or supplier costs.

Beyond that, restaurants’ biggest concern could be timing. The bill must still pass the Senate, and even then, it could take weeks for the grants to roll out.

Consider another long-called-for aspect of the most recent stimulus bill in December: Shuttered Venue Operators Grants, a tranche of $15 billion in aid for concert halls, theaters, museums, zoos and other entertainment venues. More than two months after becoming law, the U.S. Small Business Administration has yet to outline how or when those businesses can apply for grants.

“It’s dragging its feet a little bit in getting released, but I’ve had a lot of clients reach out to me who are anxious to get that program underway, so hopefully that’ll break loose pretty soon,” said Bill Burnham, a consultant with the University of South Florida’s Small Business Development Center.

Burnham and Castor described the venue grants as “imminent,” though neither knew an exact date. But with the Paycheck Protection Program loan window slated to close March 31, the venues grant and restaurant grants — whenever they arrive — are likely to get additional looks from those businesses.

At La Cabaña, Betancur hasn’t applied for a second Paycheck Protection Program loan, but said he’ll look at the grant program once more details are released. Until then, he’s focused staying afloat at 50 percent capacity, with about 60 percent of his staff back in place. The only way to do that is to keep serving customers.

“It definitely was the community, our clientele, the customers, that allowed us to keep being here,” he said. “Those people stepped up in a huge way, and I thank them every day for that.”

Frequent eating out can cause heart disease: Study – Times of India

Delhi: Two held for duping after posing as employees of a food joint – Hindustan Times