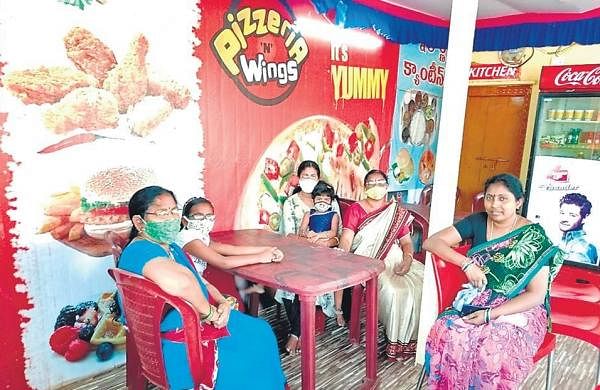 MULUGU : Pizza, the Italian dish whose popularity is growing by the day, has now arrived in Mulugu — very much a rural area with a majority tribal population. A self-help group (SHG) of 10 women has made this possible. They set up the first pizza outlet in the district, and it has reportedly received a good response from residents, including tribals. With gradually increasing demand for pizzas from residents along with the rise in Covid-19 cases, the women are planning to start a free home delivery service in Mulugu town.

The SHG, named Ganapathi Mahila Podupu Sangham, running under the Nava Bharat Mandal Federation, set up the outlet titled ‘Pizzeria N Wings’ a month ago on the premises of the Mulugu District Collectorate. The Federation provided the women a loan of Rs 1 lakh to set it up. Pizzeria N Wings’ menu also boasts of burgers, french fries, chicken wings and lollipop.

Speaking to Express, Kanthala Madhavi, a member of the SHG, said “ We never expected that in such a short time the outlet will receive a good response from the public.” She said every day, sales of Rs 3,000-3,500 were registered, which nearly doubled to Rs 5,000-6,000 during weekends.

Madhavi says the idea to begin the outlet stemmed from the Annapurna Canteen, which was set up in 2019 at the collectorate premises with a loan of Rs 3.50 lakh. “We then thought of opening a pizza centre as there is no such place in Mulugu town. The women submitted a proposal to obtain a loan of Rs 1 lakh to the District Rural Development Organisation (DRDO) for financial assistance to set up the outlet. “The officials encouraged us by sanctioning the loan. We took a month of training on preparing various varieties of pizza, burgers and other items. We serve clean, quality food to the people of Mulugu district at a reasonable price, and will soon start free home delivery service in the town limits,” gushes a proud Madhavi.

Anisheti Swaroopa, another member of the SHG, said while Mulugu district was known for its tribal populations and tourist spots, it was missing a place selling good pizzas. The outlet appears to be inspiring other SHGs to replicate the model in their districts. Women from SHGs in Ramappa, Laknavaram and Tadvai have been visiting the outlet to learn how to prepare pizzas. And Swaroopa says the visiting women have their full backing.

Novelty, variety make store popular
‘Pizzeria N Wings’ opened its doors a month ago on the premises of the Mulugu District Collectorate. Apart from various varieties of pizzas, its menu also boasts of burgers, french fries, chicken wings and lollipop. The store registers daily sales of around `3,000-3,500 on weekdays and `5,000-6,000 on weekends