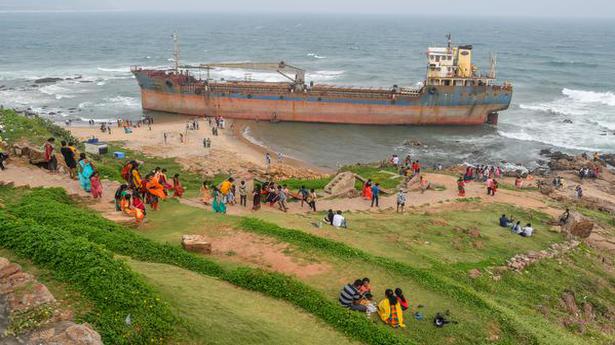 Work on the much-anticipated tourism project – floating restaurant on the abandoned Bangladeshi ship m.v. Maa – near Tenneti Park is all set to begin.

The Tourism Department has also decided to allow people into the ship from December 29.

The Tourism Department, in association with the private firm M/s Gill Marines, is taking up the project under Public Private Partnership (PPP) mode. It is expected to be completed in four to six months.

Addressing the media at Tenneti Park here on Thursday, Tourism Minister M. Srinivasa Rao said, “m.v. Maa will be another feather in the cap of Visakhapatnam.”

“The department is going ahead with the project only after ascertaining its feasibility from the Visakhapatnam Port Trust (VPT). Tourists will be allowed into the ship from December 29,” the Minister said.

“The private firm has sought six months time to complete the works on the restaurant. But we have asked it to complete the task in four months,” Mr. Srinivasa Rao said, and added that either the Greater Visakhapatnam Municipal Corporation or the Visakhapatnam Metropolitan Region Development Authority would lay the pathway to the ship.

The Bangladeshi ship had drifted to the shore from the anchorage port during a cyclonic storm on October 12, 2020, and ran aground near Tenneti Park. As it could not be salvaged, the vessel’s owner, M/s Advance Shipping Ltd., Dhaka, had declared the ship as abandoned.

Later, M/s Gill Marines, Visakhapatnam, had taken over the vessel from the insurers of the ship. The Tourism Department had approached the private firm to develop it as a floating restaurant under the PPP mode.

As per the proposals, there will be an open-air restaurant on top of the ship. Another air-conditioned restaurant with skyroof will be operated inside the ship. Around 300 persons can be accommodated in the restaurant. The total project cost is nearly ₹10 crore.

“The price of entry ticket may range from ₹50 to ₹200 basing on the day and time,” the officials said.

4 Restaurant Stocks That Will Thrive After the Pandemic – Barron’s