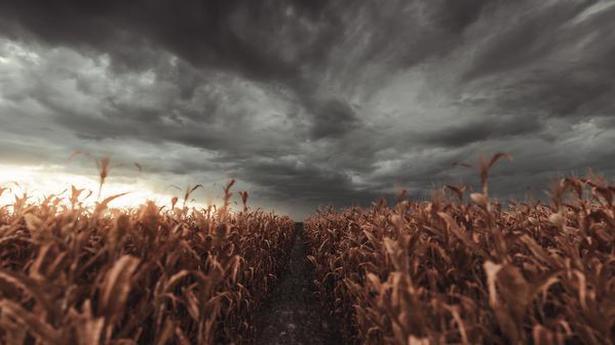 In any reimagination of food systems, now unequal and strained, the world has to factor in climate change adaptation

The United Nations Climate Change Conference (COP26) held in Glasgow between October 31 and November 12, 2021 with a huge gathering, generating headlines, criticisms, and some commitments.

Governments did commit to reducing greenhouse gas emissions and put forth a record-shattering U.S.$356 million in new support from contributing national and regional governments to protect the most vulnerable. But this is not enough to stay below the limit of 2°C above pre-industrial levels. COP26 fell far short of the ground-breaking success many had hoped for.

“Our fragile planet is hanging by a thread… It is time to go into emergency mode — or our chance of reaching net-zero will itself be zero,” said UN Secretary-General António Guterres.

He added that we must “build [the] resilience of vulnerable communities against the here-and-now impacts of climate change. And make good on the $100 billion climate finance commitment to support developing countries.”

The agenda of ending world hunger and malnutrition in all its forms by 2030 is facing formidable challenges as the climate crisis and hunger are linked inextricably, and that along with several major drivers have put the world off track. This has been more so after the COVID-19 pandemic has doubled the population under chronic hunger from 130 million to 270 million.

Analysis by the United Nations World Food Programme (WFP) shows that a 2°C rise in average global temperature from pre-industrial levels will see a staggering 189 million additional people in the grip of hunger. Vulnerable communities, a vast majority of whom rely on subsistence agriculture, fishing, and livestock and, who contribute the least to the climate crisis, will continue to bear the brunt of the impacts with limited means to cushion the blow. The absence of social protection measures such as food safety nets forces the food insecure to depend on humanitarian aid for survival.

Across the world, up to 811 million people do not have enough food and as per the recent WFP estimates, 41 million people in 43 countries are at risk of sliding into famine.

The poor and the vulnerable continue to be hardest hit. Even though they contribute least to greenhouse gas emissions, people in low-income countries face the worst impacts. The top 10 most food-insecure countries contribute 0.08% of global carbon emissions.

Crop failures, water scarcity, and declining nutrition threaten millions who rely on agriculture, fishing, and livestock (it must be reiterated that they are those who contribute the least to the climate crisis).

The climate crisis will impact food production and livelihoods but also, as per the latest Intergovernmental Panel on Climate Change (IPCC) report, threaten nutrition through multi-breadbasket failures.

Adaptation and resilience-building for poor and vulnerable communities are critical for food security. The focus though has been on reducing emissions and targets related as these are essential to protect livelihoods and the food security of millions.

In its outcome document, the conference took note of how climate and weather extremes and their adverse impacts on people and nature will continue to increase with rising temperatures. There is a strong emphasis on the urgency of scaling up action and support, including finance, capacity-building, and technology transfer, to enhance adaptive capacity, strengthen resilience and reduce vulnerability to climate change in line with the best available science, and considering the priorities and needs of developing country parties.

Significantly, the statement welcomes the national adaptation plans that deepen the understanding and implementation of adaptation actions and priorities. This is an area where India has a huge role to play with its ongoing and now substantial policy work at the national and State levels.

The outcome document also extends an invitation to the IPCC to present at the COP27 (in Egypt) the findings from the contribution of Working Group II to its Sixth Assessment Report, including adaptation needs to further the understanding of global, regional, and local impacts of climate change, response options, and adaptation needs.

The recent pledges made by the developed countries on enhancing climate finance to support adaptation in developing countries to adjust to worsening climate crisis impacts were welcomed in the outcome document from COP26. It observed that the contributions made to the Adaptation Fund and the Least Developed Countries Fund, represent significant progress when compared with previous efforts.

The current climate finance for adaptation and base of stakeholders remain insufficient to respond to worsening climate change impacts.

“(COP) calls upon multilateral development banks, other financial institutions, and the private sector to enhance finance mobilization to deliver the scale of resources needed to achieve climate plans, particularly for adaptation, and encourages Parties to continue to explore innovative approaches and instruments for mobilizing finance for adaptation from private sources.”

Mr. Guterres, at an emergency summit in Milan, Italy, at the end of September, had called for funding for developing nations, 50% for adaptation and resilience to the climate crisis. He said, “Adaptation needs are increasing every year.” “Developing countries already need $70 billion for adaptation, and that figure could more than quadruple to $300 billion a year by the end of this decade.”

The WFP is working with communities to adapt to the changing climate that threatens their ability to grow food, secure incomes, and withstand shocks. It has supported 39 governments, helping them realise their national climate ambitions.

In 2020, the WFP implemented climate risk management solutions in 28 countries, which benefited more than six million people so that they are better prepared for climate shocks and stresses and can recover faster.

In India, the WFP and the Ministry of Environment, Climate Change, and Forestry are planning to develop a best practice model on adaptation and mitigation with potential support from the Adaptation Fund.

Here are a few key areas or measures we should focus on. First, creating resilient livelihoods and food security solutions by protecting and improving the livelihood of vulnerable communities. Second, the adaptation of climate-resilient food crops, such as millets, for nutritional security. Third, enabling women’s control and ownership of production processes and assets and increased value addition and local solutions. Fourth, promoting a resilient agriculture sector by creating sustainable opportunities, access to finance, and innovation for small-holder farmers, with climate information and preparedness. Fifth, building capacity and knowledge of civil society and governments for vulnerability analysis to increase food security by addressing the link between food security and climate risk.

The climate crisis impacts all parts of the global food system — from production to consumption. It destroys land and crops, kills livestock, depletes fisheries, and cuts off transport to markets. This impacts food production, availability, diversity, access, and safety. At the same time, food systems impact the environment and are a driver of climate change.

COP26 came after the pioneering UN Food Systems Summit in September, which was a wake-up call that food systems are unequal, strained, or broken as 811 million people are going to bed hungry.

The United Nations Special Envoy for Food Systems Summit, Agnes Kalibata, has called for an unprecedented focus on food systems — food and agriculture — by ensuring that COP27 has a dedicated focus on this.

We are on the cusp of transformation to make the world free of hunger by 2030 and deliver promises for Sustainable Development Goals (SDGs), with strong cooperation and partnership between governments, citizens, civil society organisations, and the private sector.

This requires reimagining the food system towards balancing growth and sustainability, mitigating climate change, ensuring healthy, safe, quality, and affordable food, with investment from governments and the private sector in supporting farmers while maintaining biodiversity, improving resilience, and offering attractive income and work environment to smallholders and youth.

A Chinese Chef’s Tasting-Menu Deliveries, with a Side of Instagram Live – The New Yorker