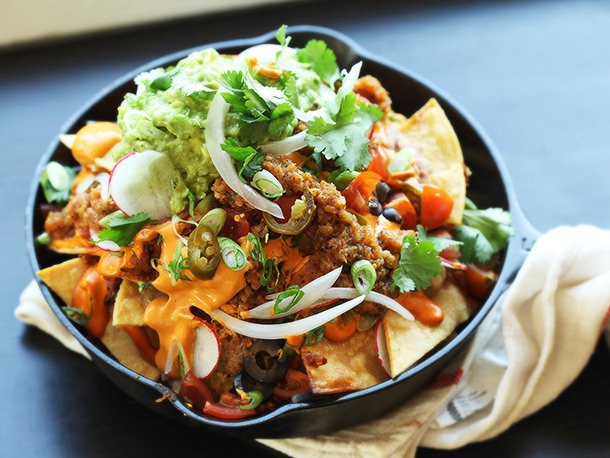 So you’ve committed to going vegan for Veganuary. Yay!

Your body, the planet, and the animals thank you. Going vegan is one of the best things you can do as an individual to fight climate change, according to the United Nations, as meat and dairy are some of the worst contributors to greenhouse gas emissions, drive deforestation, accelerate biodiversity loss, increase water usage, and pollute surrounding environments.

Countless studies have also concluded a plant-based diet is good for your health and, of course, millions of animals are spared.

All of that is great. But now you’re two weeks into January, the cheese is calling your name, and the inspiration well has run dry. We hear you.

Whether you’re doing it for the animals, the planet, or your health, we’ve got you covered with these delicious vegan recipes from a new generation of women of colour food pioneers using their platforms to challenge the notion of who can be a vegan. And don’t forget, if you need more daily inspiration to keep going with Veganuary, you can also download the Global Citizen app and take our “Go Vegan for a Week” challenge.

We know what you’re here for so let’s get straight down to business: dessert. These beauties were conceived by Meera Sodha. She’s the Guardian’s “New Vegan” columnist, award-winning cookbook writer, and master of vegan Indian wizardry.

Hands down the fudgiest, most chocolatey umami brownies you’ll ever try — and the only acceptable reason to use the word “moist”. Try them here.

If plantain is your love language then this dish will make your tastebuds do a little dance. This recipe is from Safiya Robinson — a self-taught creative cook of British, Jamaican, and African-American descent, who adopts an intersectional approach to veganism.

She says: “This recipe is pretty simple, but there are lots of parts to it, so take your time with each step and try not to get overwhelmed!” Get cracking here.

These are a staple street snack in Hong Kong and also happen to be Jenny Lau’s sweet, salty, and umami go-to. Lau is the brains behind the vegan Chinese food blog Celestial Peach. Get the recipe here.

Turns out Denai Moore’s side hustle is making ackee and saltfish. The British-Jamaican artist and singer — known for her soul-infused vocals and collaborations with SBTRKT — also runs Dee’s Table, a vegan Jamaican supper club. This vegan jerk “chicken” recipe is Moore’s take on a crowd-pleasing classic. Dig in here.

Made with mostly pantry ingredients and super easy to whip up, these quesadillas from Nisha Vora’s kitchen will definitely rival your traditional cheese ones. Vora is the founder of Rainbow Plant Life, a blog she’s been running for years. Try them here.

6. Rainbow Jeon by Joanne Molinaro (a.k.a. The Korean Vegan)

In Korean cuisine, jeon is a fritter made by seasoning fish, meat, and vegetables and then coating them with wheat flour and egg wash before frying them in oil. Previously a high-powered barrister, Joanne Molinaro left the law to become The Korean Vegan, a TikTok superstar whose candid storytelling style has captured the imagination of her 2.7 million followers. Is there anything she can’t do? Try her jeon here.

Ankita P. Murray describes herself as “prone to life threatening kitchen injuries”. If she can make these noodles unscathed, so can you.

If pizza’s what you’re missing, why not try this white-base one from Priyanka Naik? Naik is a self-taught Indian vegan cook making globally-inspired dishes. She hosts a weekly IGTV series called “Cook With Chef Pri at 3” where you can find her airing a brand new vegan recipe every Sunday at 3 p.m. EST.

Whoever said you can’t have bomb vegan pizza hasn’t had this one.

9. Asopao by Catherine from Plant Based RD

Asopao is Puerto Rico’s national soup and is basically a catch-all term for stews and the like. This Asopao Dominicano is hearty and full of flavour, perfect to cozy up with during the colder months. Yum. Find the recipe here.

10. Sweet Potato Pancakes by Tomi Makanjuola (a.k.a. The Vegan Nigerian)

Who knew that sweet potato puree in the batter would make a fluffy, homemade pancake that’s better than any box mix could produce. These pancakes are from Tomi Makanhuola, a vegan chef and content creator who specialises in Nigerian and fusion cuisine. Get whisking here.