There are hundreds of pasta styles in Italy, and their origins and of how they’re made are different. Even the way ther are served varies. Italian pasta ranges from pasta that gets added to vegetable soups – like the zumari to the short pasta – abbotta pezziende, ricci, gnocchi, the corzetti and the avemarie, and so many more.

Now an interesting project is documenting and sharing old recipes of pasta dishes that are made across Italy.

Launched by Vicky Bennison, who was working in international development in places like Siberia, South Africa, and Turkmenistan, before moving to writing books. She has written ‘The Taste of a Place’ food guides which tell you where to find good food and wine in Corfu, Mallorca and Andalucia. The books were recommended by The Observer, The Times, and Delia Smith Online, amongst others.

Bennison has a home in Le Marche in central Italy where – nearly 10 years ago – she noticed that it was only older women who made pasta by hand on a daily basis. “Those over 80-years-old are the last generation who had to do this to put food on the table – for everyone younger it is a choice,” she says. “I thought two things: I’d like to make a record of their skills; and secondly, this is a good opportunity to celebrate older women who are too often invisible in the food media.”

The work on the project has taken her all over Italy, from the mountains of Alto Adige to the Egadi Islands of Sicily. “Our youngest grandmother was 44 at the time we filmed her, and our oldest is 102 years old.”

The series has also been made into two cookbooks.

Bennison says she turned to making videos because of the physicality of making pasta. The Pasta Grannies YouTube channel went viral five years ago and the two cookbooks ‘speak’ to the channel, they complement it and give fans something tangible to read and enjoy.

So far, 430 women (and a few men) have appeared on the channel. And their collective culinary heritage stories are amazing. For instance, there is 100-year-old Giuseppa’s story which Bennison says could be appealing to younger, less-waste minded generations. “She was a tailor, specialising in Sardinian traditional costumes who loved her work so much that she wasn’t interested in getting married. She eventually did in her 30s (most unusual for the time). She made her own wedding outfit and she has refashioned her coat twice. She still wears it as a jacket, over 60 years later. She has only recently given up vegetable gardening.”

Then there is 100-year-old Maria from Calabria who was a chair maker and had to look after her farm at the same time. She spends most of her year with her daughter in Rome but travels back to Calabria for the summer months. “Wherever she is, she makes a little vegetable garden, in pots if need be. It makes wherever she is a home. Her story is profiled in book two.” 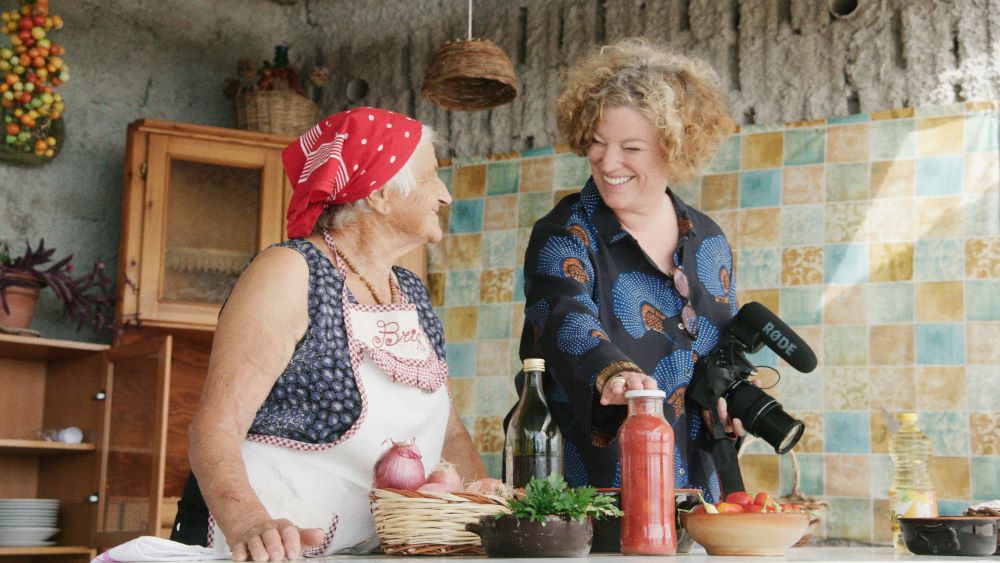 For Bennison, the channel is a fun way to use new technology to make accessible some ‘old fashioned’ cooking and inspire younger audiences.  “The Pasta Grannies statistics tell me both the YouTube channel and Instagram feed are most popular with 25-35 year olds – so there are lots of young people who are interested in cooking from scratch -even if it is just at the weekends. And of course it has ceased to be women’s work. Now men are just as enthusiastic.”