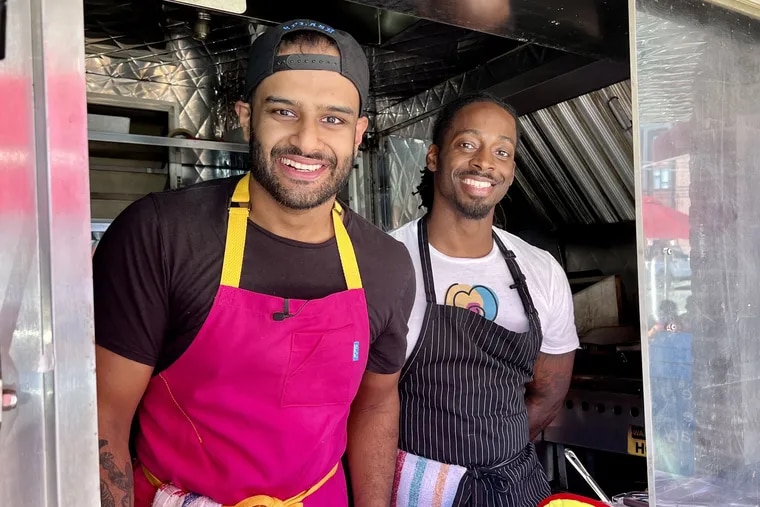 Chefs with big ideas use pop-up events to gain exposure and refine their concepts before they commit to investing in a brick-and-mortar restaurant.

Two chefs who met working in the kitchen of Buddakan in Old City each have their own business but are working together. The pop-up starts with tacos from Chef Reuben (Reuben Asaram), and wraps with a miniature cheesecake from Make’m Bake’m (Cory Powell).

Their next pop-up is Monday, Sept. 26, from 3 to 7 p.m. at Herman’s Coffee, 1313 S. Third St. The menus, which change from pop-up to pop-up, are posted on Instagram. One of the tacos from Chef Reuben will be what he calls a Koobidillo — koobideh-spiced, twice-ground beef picadillo with potatoes on a flour tortilla with cilantro, onions, chayote kimchi, and lime beet “white” sauce. Make’m Bake’m will sell frozen cheesecake bars, including pumpkin spice dipped in white chocolate and covered in ginger cookie crumbles and white chocolate drizzle.

Reuben Asaram, whose family emigrated from India when he was a year old, grew up in Queens and Hyde Park, N.Y. He got his love for food from his grandfather, who cooked family feasts. “My earliest memory was when I was 3 or 4 years old, and I was watching him make these kebabs and stuff out of the oven,” said Asaram, 30. “He taught me that food brings people together and it makes you happy.”

His family wanted him to become a doctor. After high school, he enrolled at the University of Western Ontario for its medical program. Six months in, he called home and his father asked why he sounded glum. “I was like ‘I’m doing this for family. I always wanted to cook,’” he said. “My dad said, ‘You’re going to do it the right way. You’re going to go through culinary school.’” That choice was the Culinary Institute of America in Hyde Park — 15 minutes from home. He got his degree in 2011.

His culinary work began in New York City — Jean-Georges Vongerichten’s Spice Market, and then Morimoto, followed by four years at Hakkasan, the Michelin-starred Chinese restaurant, where he climbed from line cook to sous chef. Starr Restaurant Organization reached out with an offer to become sous chef at Buddakan in Philadelphia — for less money. “Money didn’t matter to me,” he said. “It still doesn’t, because I love what I do, and I’m only in it for more experience. I fell in love with Philly right away.”

But back issues made working difficult. He left Buddakan in 2019, and decided to buy a food truck. On his way out the door to pick up the keys, he stood up and two discs in his back ruptured. “L4 and L5,” he said. “I felt like a straight lava going down my legs.”

Asaram didn’t go through with the truck. After surgery, he spent much of the pandemic rehabbing. “It was God’s way of telling me that I wasn’t ready,” he said. He drifted into a funk, fearing that he would never cook again, but snapped out of it. He hired a trainer, started cooking with the help of a walker, lost weight, and decided to go the pop-up route to gain exposure while searching for a brick-and-mortar location.

Asaram specializes in tacos that — in his words — “bridge the cuisines.” The tacos served at the last two pop-ups have had nods to Asaram’s Indian heritage, but he’s also gone with Middle Eastern and Thai flavors.

“My style is pretty much Mexican cuisine, but I like to use Asian ingredients alongside the Mexican ingredients,” he said. A dish he calls tikkarnitas is shredded, crisped tikka-spiced pork, cilantro, onions, and lime beet crema on a blue corn tortilla.

“I like saying bridge because I hate the word fusion.”

Cory Powell’s first taste of kitchen life, as a young man in Ewing Township, N.J., was while working in nursing homes.

The fine-dining piece came from his education at Le Cordon Bleu Institute of Culinary Arts in Pittsburgh, from which he externed at Pittsburgh’s Duquesne Club.

His next stop was a country club in Palm Beach, Fla. “I liked the country club team because I really wanted to focus on fine dining,” said Powell, 35. “I really wasn’t into small bakeries at the time. I wanted to get the full knowledge of fine-dining pastry.” He shuttled seasonally between country clubs in Florida and Massachusetts until he grew homesick. After working at small bakeries, he moved to Philadelphia to work for Metropolitan Bakery, where he mainly baked breads.

He left for the Rittenhouse Hotel, where he enjoyed the fine-dining aspect, but “I was getting burned out a little bit. As a baker, you work early hours and being so young, it was a lot for me. I wanted to enjoy myself. I’m still young. I still want to go out.”

He quit the industry and started working for Eden Autism Services, a nonprofit in Princeton that specializes in education and care for individuals with autism. “It was so rewarding. I didn’t know anything about autism before I got into this. I fell in love with the whole community.”

By 2016, “I was getting that itch to get back into the kitchen,” he said. “I was missing baking. I missed that kitchen hustle and bustle.” He said he took a leave of absence and traveled to Africa, where a young chef at the hotel where he was staying told him, “Oh, you’re American. Things are a lot easier for you guys, like to open a restaurant or to go into business for yourself. Here, I’m stuck in what I’m doing. I want to do more, but it’s like I really can’t.”

“That blew me away a little bit,” Powell said. “OK, maybe I am wasting a little time here, but I should really focus on something and really get it going.”

His next move was to focus on a business based on cheesecake.

Powell developed a killer recipe and, under the trade name Make’m Bake’m, creates personal-size cakes, each 6 ounces and 2¾ inches in diameter, in such flavors as red velvet; white chocolate pumpkin; fruity Pebbles; and sweet potato with burned marshmallows.

But he needed money, so he took a job at Buddakan, where he met Asaram.

“Now that I have my whole concept, and I have my recipes, I’m just trying to get my name out there,” Powell said. While he rolls out new products, such as frozen cheesecake bars, his next step is opening what he calls a little cheesecake shop — “little” as in a small shop selling small cheesecakes.